Those who loved Backflip Studios’ first Ragdoll Blaster will be pleased to see the release of Ragdoll Blaster 2, an amazing reinvention of their original hit physics-based game. The objective remains essentially the same, try to hit the target with a doll by shooting it out of a cannon.

Though the gameplay behind Ragdoll Blaster 2 is not new to the AppStore, it’s easy to see that a lot of effort went into keeping the game fresh and it’s paid off — the game has over 150 levels with each level containing their own unique distinctions, each one novel enough to merit its own praises. Between mechanics ranging from your typical cogs, ice blocks and warp fields to spring-loaded panels, teleporters and moving carts, I found myself hooked, eagerly looking forward to what the next level would have. 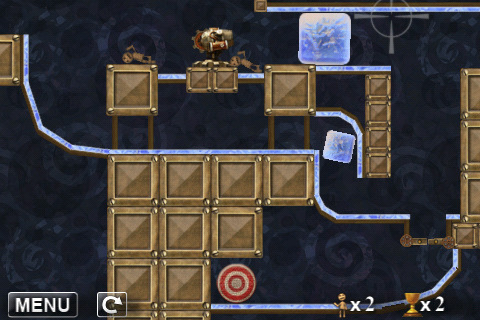 Ragdoll Blasters 2 is not difficult to play and has multiple objectives to work towards so whether you just want to be entertained for a bit or are looking for a challenge, Ragdoll Blasters 2 will have something for everyone. There are no limits to how many ragdolls you can potentially fire and there is no penalty for retrying a level which makes it ideal for anyone to play and enjoy again and again. For those who enjoy a challenge, there are in-game awards to shoot for and their Plus+ integration will allow you to submit and compare overall room scores online against everyone else.

The game’s polished graphics and stellar attention to detail adds a welcome sense of realism to an already winning game formula. Where the first game was designed like simple doodles on the pages of a graphbook, Ragdoll Blasters 2 is now decked out in full steampunk glory, literally taking the blueprints laid out in their original game and bringing them to life. Combined with its whimsical sound effects and fabulous soundtrack, Ragdoll Blasters 2 is one solid piece of work that is well worth its $2.99 price tag.