Leaders Association’s Trap Master: Dragon’s Treasure, originally named Dungeon Crawler, features an unlikely hero. Raymond Jean is a washed-up ex-army general who boozes his days away in a local tavern. Unfortunately for him, his liquor-addled brain volunteers him for a treasure hunt that’ll turn up profits greater than the wealth of the world…if they can get past the booby traps and survive the treasure’s guardian, a fierce red dragon. And congratulations, you get to help him!

Perhaps it is because Raymond is perpetually drunk, but the controls are rather easy to intuit. He can only move in four directions, which you guide by way of either Type A or Type B controls. The directional pad of Type A is located on all sides of the screen, whereas in Type B it is localized in either the lower left or right corner (you can make your decision in the Options menu). There are three levels to play in: Original, Survival, and Expert, which is locked. 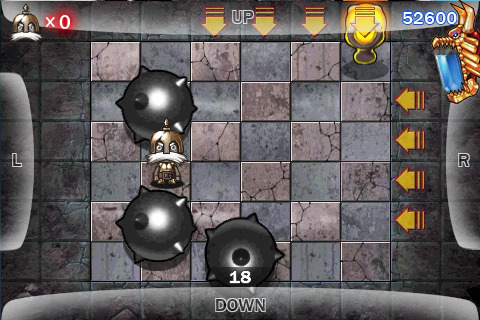 Raymond is set upon a grid with traps and treasure; it is up to you to make sure he avoids the traps and grabs the treasure for bonus points. Traps include moving objects such as boulders and tiles that are colored differently from the rest of the grid (indicating lightning, lasers, etc.); the entrance of moving obstacles will be indicated by arrows, and the number of remaining traps will be at the bottom of the screen. Every treasure you miss picking up will decrease the Dragon Attack Gauge (in the upper right corner). If it empties completely, the dragon will come down upon poor Raymond–it’s a lot bigger than a boulder and isn’t as predictable, so it’s much harder to avoid.

Trap Master (which really is a better name than Dungeon Crawler) is so polished, it’s hard to believe that it’s a fairly new game app. The controls are very responsive: I personally prefer Type B, because I find the utilization of the entire screen in Type A sometimes blocks my view of the grid. The game almost deceptively simple, as the graphics and animations are cute but well-detailed; even the soundtrack is atmospheric…and yet the developers are promising more updates for backgrounds, levels, and multiplayer support, among other things. One of the best parts about Trap Master is that it’s excitingly fast-paced, but also requires some thought as well–it’s enough to quickly become an enthralling game. I look forward to future updates, and in the meantime will definitely enjoy this $0.99 game to the fullest.