The discovery of agriculture has long been understood to be a historical turning point in the development of civilizations. Being able to grow your own food meant no longer having to follow it across the country. And so we picked a spot, settled down, stopped moving around so much and we farmed. Since then, our technological advancements have afforded us with newer luxuries and instead of getting our fruits and vegetables from the ground, they now come out of a building owned by dudes like Ralph or Albert’s son. But that lingering desire to hoe and plow is embedded from generations past and as such, vicariously manifests itself today through things like Farmville or Country Story.

For those of you who find that your sedentary ventures in digital cultivation in conflict with the get-up-and-go lifestyles of today, there is Zombie Farm. And if you ignore the part where we can’t actually reap what we virtually sow, Zombie Farm pretty much rolls over the whole concept of agriculture because now you can take your farm with you. And with the impending apocalypse weighing heavily on all our minds, Zombie Farm becomes an even more relevant commentary on the times. 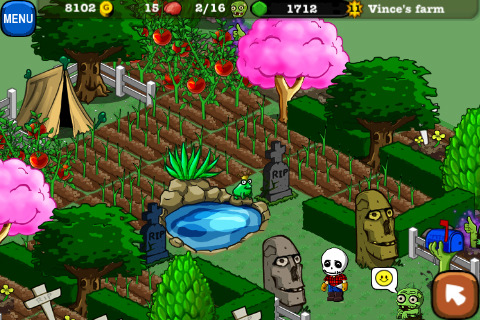 Game mechanics are pretty straightforward, typical to what you’d expect of the genre. You have your land which you can decorate and arrange to your liking. Everything you put in the ground, plant and zombie alike, has a set time it takes to grow, ranging from 10 minutes to 2 days. Actions like plowing and planting will earn you XP and as you level, more items will be unlocked. Most things are purchased with coins, though some of the more special things need brains to purchase. Once you build up your little zombie army, you can invade places like your neighbor’s farm every 2 hours for more coins and sometimes brains.

Considering that the iPhone has that handy little Push notification feature, my lazy butt was pretty disappointed that there wasn’t an option to be reminded when my harvests were ready. I also found the touch controls to be occasionally unresponsive and it sometimes got annoying, like when I’d tap something and it selected something else or when I couldn’t see where an item was being places because my finger was covering it entirely. I liked that Zombie Farm had that Invade feature, giving you a bit more to do besides being a farmhand. iPod touch users will also be happy to know that internet is not required to play Zombie Farm.

This is the first release of Zombie Farm and already it’s pretty sweet and hopefully future updates will add even more. Whether you’re groaning for more coffee or more brains, Zombie Farm will fill that need and leave you jonesing for more. Zombie Farm is free to download and play, though like other games of the type, you can buy your way to prosperity via in-game purchases of brains. But just remember that zombies are already dead before you go and spend your life’s savings on taking care of them.