Pikachu, I choose y–oh, wait. Sorry, wrong game, but you can’t really blame me for the mistake. Unlike Pokemon, 1000: Find ‘Em All is entirely an exploring and collecting game (sorry, fighting fans!). Instead of pets, you go through the world to amass a wide variety of strange inanimate objects.

Like Dorothy in the Wizard of Oz, you start off in a dull gray world. Using your finger, you can guide your little guy along and breathe life and color into the map, and the map is huge. It looks and feels a lot like a classic Zelda game, complete with the occasional house to knock at or chicken to molest. You can’t go into the houses, which I found a little annoying, but the world looks great, and it’s generally easy to get around. As you explore, there are certain sparkling hot spots where you can look for gifts, like treasure chests or magic trees. The gifts are what you use to fill out your collection. There’s not a whole lot of skill involved in finding the gifts, so it can get a little tedious. 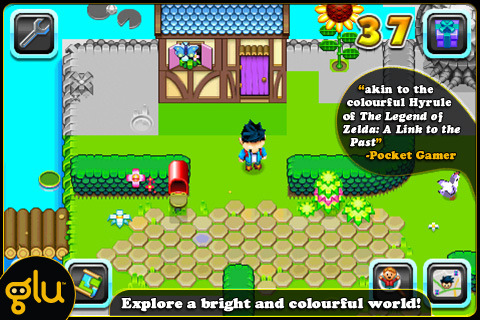 I think the game’s big innovation is their GPS feature. Through their partnership with Google Maps, you can download a map of your real world location and have gifts pop up all over your neighborhood like Christmas morning. You then have to physically go to those places to collect, thanks to the iPhone’s GPS (sorry, iPod Touch users!). You can also search the nearby area for nearby WiFi hotspots, where computer generated “Gifters” will pop up.

I thought this was a great idea, but because there is never any actual player interaction, I found it very disappointing. There just isn’t a strong enough incentive to use the GPS function to make it worthwhile. The idea of location-based gaming is still a really good one, but it just doesn’t feel like they put enough thought into how to mobilize it into an actual game community. Maybe a sequel is in order?

With their latest update, there are actually 1100 items to pick up, including things like an Elvis wig or an Easter Island statue. The descriptions are hilariously dry, but at the moment, they’re nothing more than collectibles. It would have been nice if you could wear the wig or decorate a house with the statue. You can also earn badges by collecting a certain number of items or through other activities, like coloring in a certain percentage of the world or through the GPS function.

Ultimately, the game looks and handles brilliantly, but it feels unfinished. Even though it’s not quite there yet, it’s got a lot of good ideas, so it’s definitely worth a peek, and I’d definitely keep an eye out on the developer, Glu, in the future.