According to this app, I’m ranked third in the world for my trivia knowledge. Huh? Something ain’t right here. Now to be fair, I -am- pretty good at trivia, but in a “I dominate at Trivial Pursuit on family night” sense, not an “I’ll take Potent Potables for a thousand, Alex.” A third-place worldwide ranking just tells me that this little trivia game is woefully sub-par.

The game is very simple. You get thrown 10 random questions, and you try to answer them. You get 20 seconds per question and answers are multiple choice. From what I could tell you get a bonus for answering questions quickly, but that wasn’t spelled out anywhere. 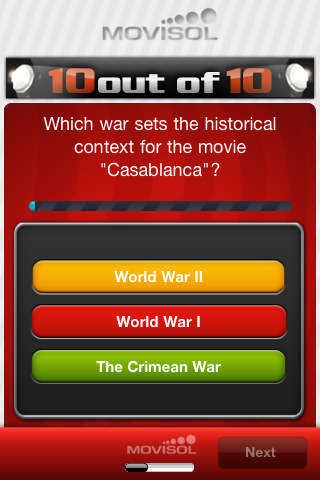 Trivia apps live or die based mainly on two things: the quality of the questions and the quantity, and 10 out of 10 is unfortunately lacking on both fronts.

Play the game and the quantity problem becomes very quickly apparent. After just a few rounds, you already get doubles. Even though they don’t give you the right answer when you get one wrong, cycle through the question enough times and process of elimination is on your side.

The quality of the questions is less egregious than the quantity issue, but it still left a bad taste in my mouth. The game has you competing worldwide against players, each in their own respective languages. Of course, all of my questions were in English, and I assume that everyone is working from the same bank of questions, but I have no idea about the quality of these various translations in other languages. For the most part, the English was solid, but there were definitely a few instances of localization awkwardness. For example, Salto Ángel is definitely called Angel Falls in English.

What irritated me more was the strong Spanish bias in the questions. I assume the developer, Movisol, is based out of Spain, because a large portion of the questions were dedicated to the minutia of Spanish history, sports, geography, and art and architecture. Now, I love Spain and think it’s a beautiful country, but I dislike it when an internationally-branded trivia game is so focused in its subject matter.

To wrap things up, the game looks and functions perfectly fine, but it’s on such a limited scale that you get bored very quickly. Most of the questions are too easy, repetitive, and narrow in their focus. If you want a better trivia experience, skip 10 out of 10 and go play Trivial Pursuit again instead.

This 3rd Party App is available at the Apple iTunes AppStore. Browse the full list of all AppStore apps filed under the AppStore category.
Download 10 out of 10 at iTunes App Store
Price: Free
Developer: Website
AppSafari review of 10 out of 10 was written by Tracy Yonemoto on April 15th, 2010 and categorized under App Store, Free, Games. Page viewed 4228 times, 1 so far today. Need help on using these apps? Please read the Help Page.