Did any of you use to make cities out of blocks as a kid? Okay. Well, did any of you also then proceed to destroy them while pretending you were a giant monster? Yes? Awesome! Me too! I get the feeling destruction and mayhem on a massive level is hardwired into our brains, and as a result, I thought busting up skyscrapers in Monster Crush was a smashing good time.

Now, Monster Crush doesn’t let you be a giant monster bashing through the city, but, I promise, it’s almost as good. Instead, you use your noggin to strategically blow up buildings to try to crush the monsters! Unfortunately the monsters are actually aliens and only people-sized, which irks me a bit, but this is still an explosively fun physics-based game. 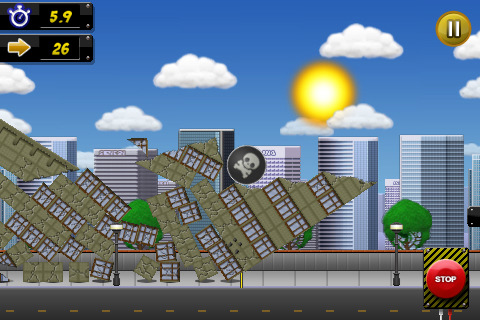 Using a variety of bombs and carefully placed girders, your job is to squash the purple invaders as efficiently as you can. This might mean dropping a 12-story skyscraper on them or it might mean carefully directing a gigantic ball o’ death to squish them into intergalactic goo. You arrange your bombs and girders, timing the charges as you see fit, and hit go. If you’ve done it right, the aliens are crushed by a devastating torrent of brick and steel, and if you’ve done it wrong, well, just rearrange your bomb placement and try again.

This is the kind of game that will really appeal to your inner demolitions expert. It’s wonderfully easy to place and set bombs to your liking, and there’s even two zoom options for easy viewing and tapping. Of course, all of this is window dressing for the real star of the show: the physics engine, and, believe me, it does not disappoint. It was so much fun knocking the buildings over again and again. Most of the time it didn’t even matter if there were aliens for me to squash; it was just fun trying to make the most spectacular crashes I could manage.

The game is definitely on the destructive side, and it’s not really the most polished looking game out there, but it’s all good cartoony fun, like watching Wile E. Coyote going BOOM from the latest ACME product. If you dig physics-based games or just like explosions, you’ll definitely have a blast with Monster Crush.