Story time! So, last year, I went on a family vacation in Cape Cod, where we ended up staying in a rented house that was designed entirely around hexagons. The rooms were hexagons, the windows were hexagons, even the trash cans were hexagon-shaped. It was a truly bizarre space that made you feel like you were living in some kind of alien hive. Why bring this up? Because CruX is all about the hexes, baby.

A variation on sudoku, CruX starts off with a giant hex grid. The object of the game is to fill in all the white or blue spaces around a black space with the numbers 1 through 6, without any repeats. Additionally, there are 6 evenly spaced blue hexes along the outside edge which must also be filled in 1 through 6, no repeats. Spaces can surround more than one black hex, which is where the sudoku-like challenge comes in. 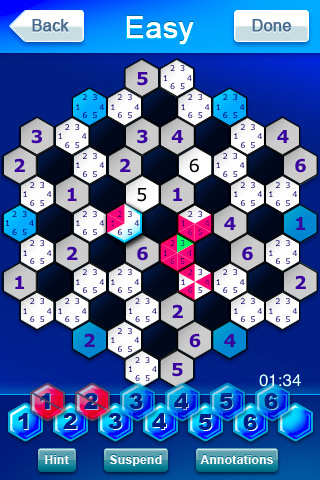 You can also sometimes get number hints in the black spaces, for example “23”, to indicate that the two and the three go next to each other in the surrounding spaces. I found this a little confusing at first, since I initially thought it meant that twos and threes always went next to each other, but it seems as though the hints only apply to their particular hex rings.

The number of hints and pre-filled spaces you start with depends on what difficulty level you’re playing. It’s not unlike sudoku in that regard, but I found the actual difficulty could vary wildly within a setting. Even on the easiest setting, there isn’t always an obvious entry point into the puzzle, so you really have to approach it with a little patience.

The interface looks nice and is fairly intuitive. There is a hint system and a basic notation system which you can turn on or off at your discretion, which is handy, because it looks a lot more cluttered when it is on, but there is no auto-save, which is a little irritating, since you can’t just leave in the middle of a game. The save system is also a little confusing, since it isn’t immediately clear that the option to “suspend” a game is the same as saving it, although, of course, it is. There is also a leaderboard which you can submit your high scores to, but only if the game has been completed while entirely uninterrupted.

I’m not big on number puzzles personally, so I wasn’t particularly wowed by the sudoku-esque style of CruX, but it is a solid concept, although I would really only recommend it to established sudoku fans. I’m not on board with tackinG capitaL letterS ontO wordS tO makE theM seeM cooleR, but if you love sudoku and feel a desperate need for more hexes in your life, CruX is here for you.