“Space,” to quote Douglas Adams, “is big. Really big,” but if you play a lot of Ace Omicron, space is also positively crawling with asteroids and exceptionally prone to explosions.

Ace Omicron is, essentially, a massively updated version of the classic arcade game, Asteroids, what with them both being multi-directional, space-themed, shoot ’em ups, but there are also dozens, if not hundreds, of other games like this. In a nutshell, you fly through space, blasting asteroids and alien ships into oblivion, while also collecting various cosmic detritus that you can shape into useful ship upgrades for blasting even more asteroids and alien ships. Not much by way of plot in these games, but that’s okay. 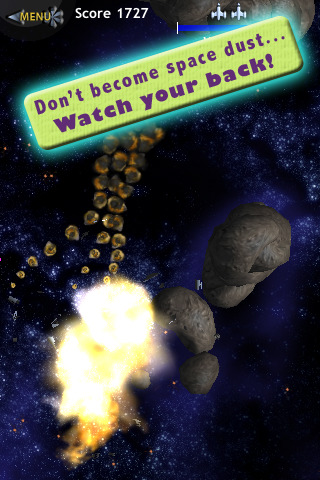 You have three different modes to play in: Hyper, which automatically upgrades your ship for you, Twilight, a survival fest which maxes out all upgrades, and Classic, which lets you pick and choose your upgrades. They all have a slightly different feel, although individual levels definitely start to get repetitive very quickly, especially as there are no bosses.

The controls are touch-based, which isn’t surprising, but while there are plenty of games where my fingers get in the way of the action, I didn’t expect this game to be one of them. The single finger control scheme means that tapping and holding controls both firing and thrust, and the longer you hold, the faster you go. The controls are responsive enough, but the general mechanism gets awkward very quickly when you’re desperately trying to destroy a rapidly approaching asteroid, but you also don’t want to fly right into it.

You can tap the ship to activate a parking brake mechanism to lock you in place, and it which will stop on a dime, but it’s a seriously clunky means of maneuvering, especially when you’re about to be crushed from all sides. The awkward controls also require you to constantly move your fingers around just so you can see the screen. My guess is that the major reason for the clumsy controls was so you could play the game in both landscape and portrait mode, which I did appreciate, but not at the expense of the control scheme.

On the other hand, I did quite like the explosions in the game, since they looked great and felt satisfying. The other graphics and backgrounds are less exciting, but the music and sound effects are beautifully suited to the game’s feel. You can also play your own music and share your high scores via OpenFeint, which are small, but nice touches.