With a title that lights a fire in your belly and grows hair on your chest, Warblade far surpassed my hopes for another Galaga-esque shooter on the iPhone. Although it would be easy to write this off as “just another classic shooter”, there’s nothing “just” about Warblade.

Unlike the dozens of Space Invader and Galaga clones out there, Warblade doesn’t just set out to recreate the retro look of the originals, but instead emphasizes, in their words, “very good playability,” and that’s not just lip service. Like the classic space shooters of yore, Warblade is heavy on action, light on story, gorgeous to look at, and absurdly fun to play. 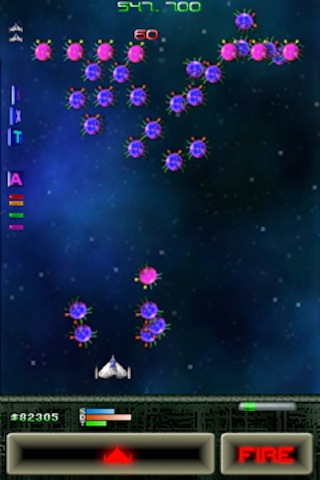 Like most shooters, you have a limited number of lives. Once you’re out, it’s game over, and, in the end, it’s all about the high score. Although the overall experience isn’t especially original, three things really make the game shine: the controls, the upgrades, and the unlockables.

There are three different control types to accommodate any playing style: tilt, 1:1 touch, and digital buttons, and they’re all fantastic. To make my point, I usually hate tilt controls with a burning passion, but the tilt controls in Warblade were an absolute pleasure. Beautifully responsive and easy to use, the various control schemes handled like a dream, while the many different upgrades and unlockable bonuses added a massive amount of variability and challenge to the experience.

The upgrades are surprisingly thoughtful and balanced. You can purchase them in the shop or collect them as an enemy drop. Enemy drops can be things like extra guns and armor, but they’re not all good, so it pays to be vigilant. Shop purchases affect your basic ship settings, so no matter what kind of extra bonuses you snag mid-level, if you purchase a double-shot, that becomes your base weapon for the remainder of the game. Figuring out how exactly you want to customize your ship adds a lot to the replayability.

Also adding to the game’s replay value are the unlockable bonuses. Reaching certain high scores unlocks sweet upgrades that give you a better starting ship the next time you play, so dying doesn’t necessarily mean starting over all the way at the beginning.

Additional features like OpenFeint achievements and the ability to create multiple profiles within the game are the succulent cherries on this delicious retro-gaming sundae. And did I mention the slick graphics and sound? No joke, those of you with newer gen iPhones and iPod Touches are in for a treat.

Bottom line: This is one of the very best shooters in the App Store, and if you’re a retro gaming fan, you absolutely need to get this one.