A scrappy band of hardened mercenaries must band together if they are to survive a nightmarish onslaught of mutated beasts. It sounds like a bad late night movie, but oddly enough, the cheesiest concept can often make for an awesome game. If you love tower defense games but can’t stand the cute factor of Bloons TD, then Bio Army is the gritty, gun-filled extravaganza you’ve been waiting for.

Despite scrapping towers in favor of chicks with machine guns, Bio Army doesn’t revolutionize the genre, but it does deliver a cracking good time. The game is path-based, and you start off with a handful of cash and a selection of mercenaries to choose from. You place mercenaries just like towers. They don’t move from their spot, and they have various abilities with different weaknesses and strengths. For example, the machine gun girl has a weak, but rapid attack capable of hitting multiple enemies at once, while the rifleman is very powerful, but relatively expensive and slow to reload.

You can upgrade and improve these abilities once you’ve amassed enough cash, but there is only ever a brief break between enemy waves, so you are always working very quickly to outfit your mercenaries. In addition to the mercenaries, there are also buildings which provide a few added benefits, like increased cash or mines you can place at the end of the path as an explosive backup.

I greatly enjoyed this decidedly darker take on tower defense, but the game wasn’t without a few minor problems. The instructions are decent, but they would benefit from slightly smoother English, and while I loved the old school soundtrack and graphics, when things started to get crazy, it became hard to distinguish one blurry sprite from another, especially since the animation also isn’t the smoothest around. 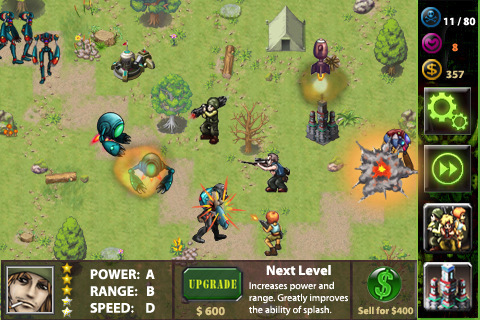 The interface is generally intuitive, especially if you’re a tower defense veteran, but you might find yourself getting frustrated with the frequent opening and closing of menus, as I did. The screen has rather limited real estate, so I can understand their choice, but given the fast paced action of the game, the near constant menu shuffling just feels awkward.

Happily, much of this is made up for by the exceptional amount of replayability the game offers. There are 15 different maps, with 5 different battle modes, including Sudden Death and Endless Battle. There are no stated difficulty levels, although you can generally tell which maps are going to be easier or harder.

If you’re brand-new to tower defense games, I’d say go check out Bloons TD or Plants Vs Zombies and get your feet wet with their cutesy graphics and gentle learning curve, but if you’re already a tower defense veteran, bored with balloons and in search of a more explosive and fast-paced challenge, Bio Army is definitely worth it.