New word game? Yes, please! Don’t get me wrong, I love me some Scrabble (aka Lexulous aka Words With Friends aka whatever other clones I’ve forgotten), but sometimes a girl just needs a little change. Not a big one, mind you, just enough to keep things interesting. That’s where Crossnerd comes in. I’m not sure if I’m a big fan of the name, but the game is solid, my fellow word lovers.

Crossnerd is actually more puzzle than word game. You have a small, filled-in crossword section, but–what’s this?! It doesn’t make any sense! These aren’t words! I’ve got my dictionary right here and—okay, hold your horses, little buckaroos, because Crossnerd is about to turn your world upside down. Instead of constructing new words, your goal is to unscramble the tiles to construct the words which should already be there. You’ll know when a tile is in the right place, so all it takes is a clever mind and a few tile swaps for everything to make sense.

The tutorial does a very thorough job of making everything clear, but this does mean that it takes awhile before things get challenging, although it does get there eventually. Two things to note: you can only swap tiles of the same type, (an end tile can only ever swap with another end tile, for example), and if you make an incorrect swap, everything gets reshuffled back to its original place.

The interface is clean and works well, definitely a plus, but not all of the layouts were quite unique, so there were definitely instances where you could have valid words in place, but still not have the “right” answer. I also wasn’t thrilled about the subtle marketing push in one of the early levels, but it was game-appropriate and far less obnoxious than an ad. The rest of the levels are perfectly benign and even come with their own particular designs, which is a nice touch, although I would have also enjoyed some levels with a particular theme to their word choices. 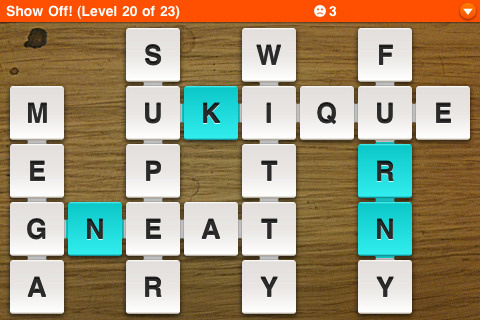 The full version is not yet out, but developers have released the Lite version in the hopes that they can improve the full version with user feedback, which seems promising. The Lite version doesn’t feel like a complete game, but it’s a very generous freebie and certainly enough to give you a taste, so if you’re into word puzzles, Crossnerd LT is definitely an affordable and entertaining twist on all the Scrabble wannabes out there.