TommyTomato is a game app. by Reyne House where you are the naughty Tommy who is perched on the roof of a building trying to hit things with tomatoes. The player’s perspective is from behind/above Tommy’s head so you can see Tommy, the side of the building, steps coming down from the building, a sidewalk, and the street. You throw the tomatoes by holding down and releasing the “Fire” button in the bottom right hand corner of the screen. A light blue vertical bar appears on the left hand side of the screen that helps you judge when to release based on the object you want to hit. The longer you hold down the fire button before releasing it, the farther the tomato will go. There are also two red arrow tabs towards the left bottom of the screen. You can use these to move Tommy left or right so he can hit his targets better. There is also a tiny red pause button towards the upper right of the screen, so you can pause the game in the middle. You get 80 seconds to hit as many objects as you can and accumulate points. Different objects are worth different amounts, because some things are easier to hit than others. A frog will appear one time in each 80-second interval, and it is worth the most points. The max. score you can get in one game is 120.

Besides the frog, there are a few other items to hit. A swift walking blonde woman in a purple top, a guy wearing green on a passing motorcycle, a taxicab, and a portly grey haired man in a mustard colored sweatshirt. I wish there were more items/people to aim at, I found myself getting bored after a little while with my target selection. Plus, they all always travel in the same direction at the same pace. If I can’t have more people/objects to hit, at least have them come from the opposite side of the screen every once in a while.

As far as I can tell, there is only one 80-second level to play over and over in this game. The only incentive to playing is to beat your own high score, I suppose. I didn’t even have to play for very long before I had a 90-point high score. Perhaps if you get a perfect score, you reach another level, but the game itself gives you no indication of that. The only choices on the manu page are “play” and “how to.” 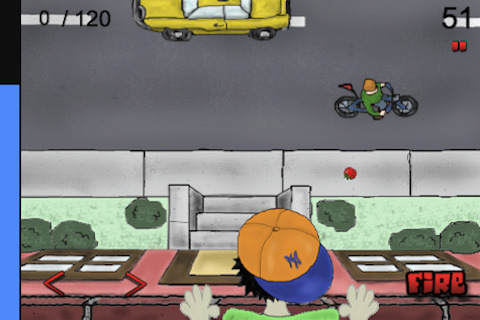 TommyTomato plays smoothly and is fun, but I just don’t think there’s enough to the game for its appeal to last for long. I think you could skip the $0.99 price tag and find a free app. that has just as many (if not more) features and better replay ability.

This 3rd Party App is available at the Apple iTunes AppStore. Browse the full list of all AppStore apps filed under the AppStore category.
Download TommyTomato at iTunes App Store
Price: $0.99
Developer: Website
AppSafari review of TommyTomato was written by Tyne Kennedy on May 30th, 2010 and categorized under Action, App Store, Fun, Games. Page viewed 4059 times, 3 so far today. Need help on using these apps? Please read the Help Page.