What five letter word does Freddie Mercury, King Henry VIII, and chess have in common? If you know the answer to that, then you should be very excited to hear that the marvelously clever word association game iAssociate now has a sequel.

Actually, iAssociate 2 is less like a sequel and more like a well-done reboot. If you’ve played the original, then just know that the brilliant gameplay hasn’t changed much, but the interface has been totally revamped and retooled. The font is still a little hard to read, but gone is the old and ugly color scheme and now the whole design shines like a new penny. There are tons of new levels and also new features like Facebook Connect and a slick tutorial which go a long way to make iAssociate 2 ready for the word-obsessed masses. 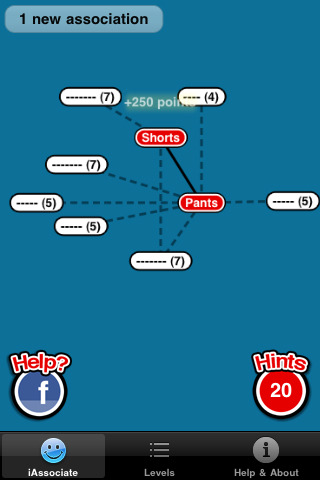 The basic gameplay is as deliciously simple as ever. You start with a single word, say “chicken”, with lines radiating out to other blanks. You then try to fill in the blanks with words that are connected with “chicken” in some way, like “egg” or “coward”. Filling in a word opens up new connections and lets you gradually create a vast network of associations which help you make new guesses. For example, say you can’t think of a 4-letter word connected with “chocolate”, but you see that the word is also connected with “cereal”, so you can guess “milk” as going with both of them.

Each level also has a particular theme to help you along, but there is also a brand new hint system in case you get stuck. The number of hints you have are limited and vary by level, but there is another feature in place where you can ask your Facebook friends for help right inside the game.

Filling in a level a certain percentage opens new levels and also earns you medals. In addition to serving as bragging rights, the medals are useful for gauging how much you have left, since you don’t start off seeing all the connections. The game is very addictive, though, so don’t be surprised if you zoom through all the levels and find yourself still wanting more. The game will also save itself after ever new word you enter in, so like a crossword puzzle, it’s an easy game to pick up and play whenever you have a few spare moments.

It’s clear a lot of love went into smoothing out the humps and bumps from the first version, and the effort has paid off in a big way. Still, aside from the gorgeous new interface and a few additional features, there isn’t a lot about iAssociate 2 to differentiate itself from the original, but it’s definitely a game well-worth trying if you’re a fan of words.