If I was only allowed one game on my iPhone this would be the game. It is an endlessly entertaining and complex game with a whopping 100 levels. The graphics are hand-drawn, which explains their character and the obvious attention to detail. The game comes from the developer, 10Tons, whose game themes are always mystical and archeology oriented, using objects like aged scrolls and ancient artifacts found and stolen through exploration. Abundante draws on these themes.

The premise of the game is that the player is an explorer—who happens to be a woman—making her way through Aztec or Mayan ruins. The challenge is to knock down shimmering gem-encrusted walls while being bombarded by obstacles that multiply on your ascent through the levels. After passing each level, you are taken back to the “Adventurer’s Map” which looks a little like the board from Jumanji and shows your progress along the trail. 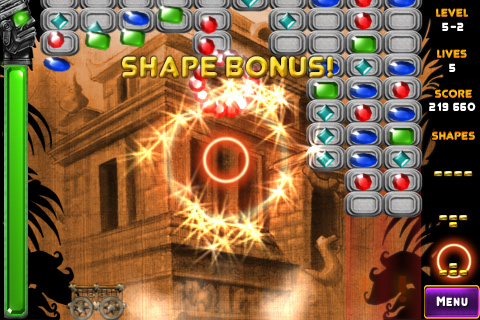 I appreciate the clarity of being given one continuous journey, because with most games you are in a haze of confusion regarding higher levels—you don’t know where you are going or how much longer until you get there. I don’t think I can explain every aspect of the game because it is so detailed and complex, but the overall goal is to match up the gems by color and quantity so that they will fall from the wall they are a part of, to your wagon below. The wall progressively moves closer to the ground, which you are trying to prevent from happening by knocking it down and collecting the pieces.

You are only given three lives so as the pace picks up, the player is given tools to help break the wall, like fiery bricks that will burn through a column, or magic wands that make the column disappear. We are dealing with treasure here, so on average a player wins about 7,000 points per level. What’s more, every other round the player gets a chance to gain another life or pick up extra points by completing challenges like the “Pyramid Bonus,” during which you have to tap the screen when the score block is highlighted.

There is no question of the game’s creativity: The levels alone are given titles like, “Shadowy Jungle,” or “Nightfall in the Jungle” and you are also given intermittent anecdotes which are amusing. I am not a gamer by any means, the few games I have on my iPhone were all free, but I would drop $2.99 on this game in a heartbeat.