Now that vampires have been reduced to a sparkly brood-fest, it’s become clear that werewolves are way cooler. And I’m not talking about the obnoxiously shirtless Team Jacob kind. Any werewolf worth his salt knows overpowering adorableness trumps teenage sex appeal any day. Wolf Boy features a cute cartoon hero named Toto who can transform into a ferocious wolf-creature with the advent of the full moon. His girlfriend, Rucy, has just been kidnapped by a giant monkey, and it’s up to Toto to save the day.

A side-scrolling hack and slash, in a similar vein as Zombieland USA, Wolf Boy packs quite a punch into a little game. Gorgeous graphics and sound let you know you’re in for something special from the get go, and the buttery smooth controls and increasingly challenging levels just keep the fun going. 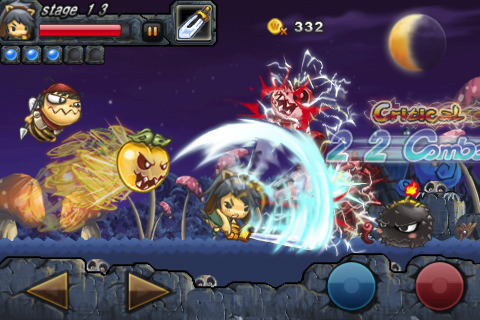 Gameplay is fairly basic, but satisfying. Each level is populated by various enemies for you to defeat, special item cubes for you to smash open, as well as a number of treasure chests punctuated by a glowing blue orb. You must collect all of the orbs to unlock the portal to the next level.

Learning the controls is simple and intuitive, as there are left and right directional buttons and two other buttons, one for jumping and another for attacking. You can double tap a direction to dash, and attacking while dashing unleashes a powerful tornado attack. Killing enemies fills up your moon gauge, and once the moon is full, you can tap the moon to transform Toto into his wolf form.

Wolf form is pretty slick because Toto becomes taller, faster, and more powerful, making it easier to take out enemies, especially those that usually hover outside of Toto’s regular reach. Wolf form is temporary, however, so you really want to make the best of it while you have it.

As you make your way through the levels, you’ll pick up cash hidden away in the item cubes and treasure chests. This will buy you much needed upgrades between levels, with separate upgrades for Toto and for his wolf form. It’s not really my favorite upgrade system, since they never add new features, just improve existing ones, but it gets the job done. Item cubes are more exciting than the upgrade system, since they’ll occasionally give you neat weapons to smash enemies with in new and interesting ways.

Now, the game is lacking a bit in terms of variety, and the storyline is pretty thin at best, but it’s well-crafted, looks awesome, and is definitely worth the $0.99 price tag. For less than a dollar, you can’t go wrong with Wolf Boy.