Optia, a game created by Beder Studios Web Site for the iPhone, iPad, and iPod Touch, requires both patience and use of your critical thinking skills. The levels it offers are endless, but they aren’t subject to completion in sequential order. You can either play the game level by level, advancing to the next one each time you beat the previous, or you can jump into the ring of fire and start the game at an expert level. The last fifty or so are locked until you advance far enough, however. Fifty is not an exaggeration either, the game actually has 100 levels. I like that there is this option since some beginning levels I found impossible to beat while some of the higher ones were beatable within minutes. 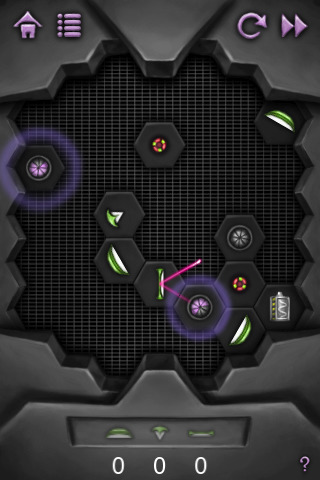 To finish a level you must arrange the number of “mirrors” provided in a way that will reflect a laser beam at the right angle. The beams are shot from what looks like a guitar amp and they are supposed to hit all of the provided targets in one fell swoop. To accomplish this you place the mirrors in different positions, rotating the position of their surface to accommodate the laser beams. It is a process of trial and error, one the can take between two to ten minutes to figure out. I gave up on a few levels when their solution was unreachable to me, but most were within my grasp.

What irritated me about this game was the difficulty I had in rotating the mirrors. Due to the instability of my hand, it was hard to position them precisely, and often the mirror would rotate back to it’s original position when I lifted my finger. On the other hand, I really enjoyed the ‘ting’ sound the mirrors made when the laser reflected off of them and the different challenges each level posed. In some games there would be obstacles in the layout, preventing a mirror from being placed in certain spots. Other times the shape of the mirror would change, causing the beam to split in two upon contact. You can keep track of how much time you spend playing by viewing the “statistics,” and the levels have cute names like “Thread the Needle.”

Today the game was offered for free. When it returns to it’s regular price I’d still recommend downloading it. Command and conquer those laser beams, I concur it’s great fun!