Let me tell you, Victorian vampire hunters have way more style than today’s glitter-smeared excuses for creatures of the night. Instead of brooding around bland jailbait, chaps like Van Helsing and his assistant Rafton are well-dressed men of science who eradicate the forces of evil with dering-do and pithy quips. To get the vibe of this game, think Sherlock Holmes meets Buffy, toss in a little hipster chic, and then make it all into a puzzle game starring plenty of vampire bats.

So how do you get to killing off those vicious bloodsuckers? Well, these are refined men of science, remember, so instead of chasing vamps around with a stake, Helsing and Rafton’s main weapons are a torch and various colored tonics. To play, you must position the torch so that it illuminates your enemies, and then finish them off with the appropriate tonic. For the most part, enemies don’t move, but they are color-coded, so you have to be very precise about where you place the torch. 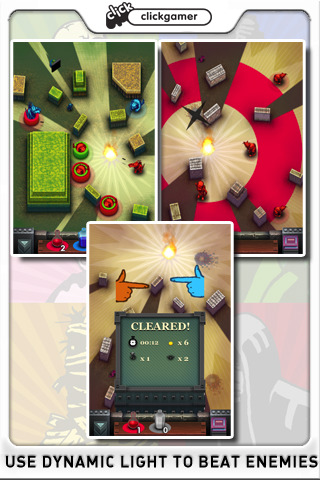 If, for example, you’re facing down a red rat and a blue skeleton, you want to set the torch so that it lights up only the rat before using the red tonic, or vice versa for the skeleton. Hitting an enemy with the wrong color tonic only makes it stronger, and your tonics are usually very limited. Messing up usually means restarting the level, but there’s no penalty to starting over and the levels don’t really start to get challenging until much later in the game.

Eventually, additional elements come into play, like colored shields you must destroy before an enemy can be killed or innocent fair maidens to keep out of the line of fire, and they do add some level of complexity to the game, but not a whole lot.

Don’t get me wrong, the mechanics of the game are dead brilliant, but the level designs have so gentle a learning curve, it’s nearly on par with Gothic Candyland. Thankfully, levels are short, rarely taking longer than 30 seconds to get through, but you have to mow through a lot of them before finally reaching something to sink your teeth into.

Happily, the eye candy graphics and witty writing do more than their fair share of carrying the action. The overall style is strongly on the silly side of hip, think ironic t-shirts, but there’s enough genuine visual charm and good humor to keep things interesting.

I know vampires and puzzle games don’t really seem like a natural fit, but neither are teenage girls and undead creepers 10 times their age, and Helsing’s Fire is million times more interesting than Bella and Edward fan fiction. It’s a little too easy to be genuinely satisfying, but Helsing’s Fire’s novel gameplay and undeniable style make it well-worth the price of admission.