Ahoy, matey! Ye have the look of a landlubber about ye, but not to fret. There be room on the seven seas for all pirates at heart thanks to Johnny Two Shoes’ hit offering, Plunderland. The game’s cute and colorful style looks gorgeously sharp, and an unusual combination of tilt and touch controls send you off on a rollicking nautical adventure. The simple pick up and play style makes it easy to slip into the role of a rotten grubby pirate, all too eager for treasure and mayhem.

Plunderland is essentially a side-scrolling platformer, but it’s a absurdly charming one. Tilting your ship left to right sends it zipping along a watery 2D plain. Along the way, you encounter enemy ships and other obstacles to blast to oblivion with your touch-aimed cannons. You might be surprised at the amount of death and destruction in such a cute-looking game, but remember, for a pirate, it’s all about the dubloons, so ruthlessly looting ships and slaughtering the natives is just another Tuesday. 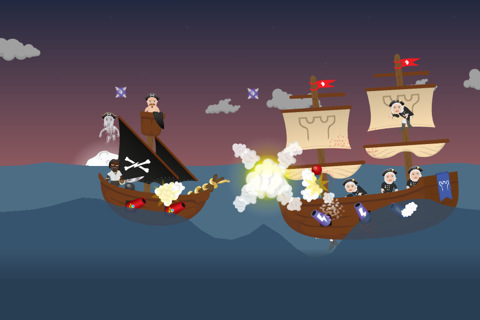 The physics engine is always working its magic on the action, which can be a bit annoying from time to time, especially when struggling to aim your cannons. It’s not always easy to hit a moving target when the waves are constantly pushing you around, but you can get used to it with a bit of practice.

Happily, there is a very robust upgrade system in place to make it easier to see to your dastardly pirate needs. Once you’ve acquired enough plunder, you can use it purchase things like better ships, extra cannons, or even magical mermaid figureheads to automatically collect nearby treasure for you. Most of these are fairly expensive and require a lot of level replays, but the levels are short and engaging enough that this usually isn’t a huge burden.

Adding to the fun is the exceptional amount of freedom available throughout Plunderland. Exploration and experimentation are seriously rewarded as just about everything is interactive, with a massive range of actions available, including, but not limited to: throwing, smashing, ripping, digging, flinging, and, even drowning. The potential for sadism is very Pocket God-esque, and trust me when I say that it’s remarkably satisfying to tear a bunch of British Navy ships into shreds, especially when the bright paper-cut style visuals are cuter than a box of kittens.

Kittens aside, the game isn’t without a few flaws. The physics problems I mentioned, but there is also no way to adjust tilt sensitivity, a fairly major oversight, but mitigated somewhat by the very forgiving gameplay. The combat system while challenging, thanks to the ever-churning physics, doesn’t provide a lot of variation, as most enemies are effectively identical, as is the manner in which you destroy them. There’s also no real plot, which doesn’t really affect anything, but it is a bit random for a group of pirates and a ghost to be traveling around together without any explanation.

Arr, but even with those complaints, Plunderland is still something pretty special. If you’re wondering if the relatively high $2.99 price tag is worth it, fear not, matey. The insanely high production values and massive replay value make this little treasure chest a real find.