Sid Meier’s Pirates! for iPad brings a classic game with a somewhat cult like following to the iPad. Indulge your inner pirate and take to the seas to be as conquering as you please as you capture treasures, ships and the hearts of the ladies. Here lies the opportunity to attck other ships, plunder their treasure and sink or keep their vessels as you please. Vessels can be traded or upgraded for you own fleet to allow more hold space for treasure. Destroy the ships in a sea battle or board them for a duel on the decks to discover secrets. The ever important pirate roll of seducing the ladies is there too, and requires a bit of a soft touch as you dance and gift your way into their hearts. The map is vast and the options and challenges seemingly endless, but you never have to feel lost as there are lists for the various challenges, with just enough guidance to keep you going on your chosen path. 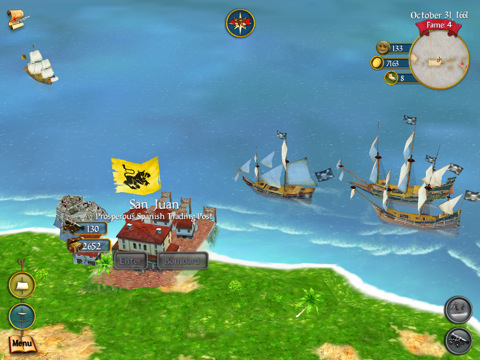 This game is for gamers, it goes beyond the sort of game that you play in a waiting room between appointments and beyond the short level arcade style that we have become used to on iOS devices. Pirates! is a game to completely immerse yourself in and play for hours at a time.

The first thing that struck me squarely in the face when I started playing Pirates! was the sheer scale of the game. While the map only covers the Carribean it feels like your whole pirate world is there, and there is more to do than you can possibly imagine. The freedom to sail the seas and attack and conquer every other ship or bombard towns is there for you to choose, each attack bringing different rewards or consequences. As a result, every time you play Pirates! it can be a different experience as you choose your own destiny. 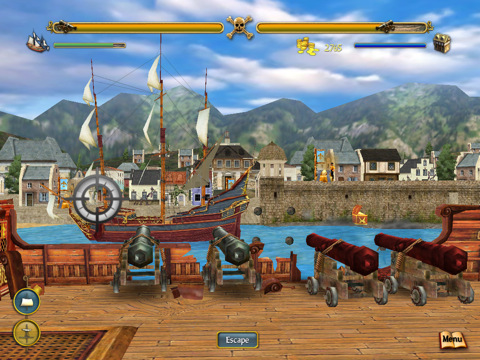 The level of detail given with regards to anything from crew happiness to ship damage is great and adds to the depth of the game. The graphics are good, very good in fact, the close up scenes when dueling or talking to people in towns is a little rudimentary but I feel it adds to the nostalgic feel that takes me back to full scale games of old. Perhaps the graphics are not as we have seen in Infinity Blade, but the depth of this game far exceeds anything Infinity Blade has to offer and as such I see it as a non issue. 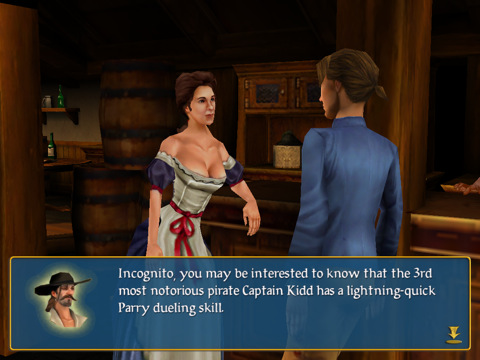 Yes this title does have it’s shortfalls, but in a game that offers up so much they really do fade into insignificance, and to spend any amount of time picking them out would be wasteful. This game is big, expansive, and nothing less than what you would expect from a company like 2K games. If you are a gamer looking for adventure, get this title and take to the seas to charm and conquer.

In some of my recent reviews I have noted that some games out there are over priced in my opinion, and Pirates! Shows exactly what I am talking about, at $3.99 (currently) this game is real value and other developers should take note.

The game currently enjoys a 5 star rating in the AppStore, and it is fully deserved.