Yarr, so ye want to be a pirate, do ye? Well, you may want to rethink that, as the Royal Navy has much more to offer: an exciting life at sea, dashing uniform, and a pension plan! Much better than the wretched living conditions and foul hygiene offered by those crabby pirates.

Cyan Worlds, of the famed Myst series, has decided to explore new waters with Stoneship, a casual board game that is quite unlike any of their previous works. Although it bears a superficial resemblance to German-style board games, Stoneship is, in fact, an unusual, but simple to play, single-player strategy game. 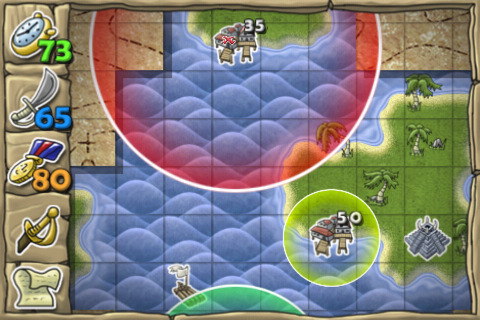 You play as the Royal Navy, charged with defending the seven seas from pirate attack. The game can be broken down into three basic parts: exploration, troop movement, and combat. It’s somewhat turn-based, but more in the sense that you get all your turns in one go, and then the pirates show up and get all of their turns; there is really no back and forth involved.

Exploration consists of moving your ship around the board, uncovering tiles as you go. You want to uncover as much of the board as possible, but you only have a set number of moves to make. This tends to be a bit of a crapshoot, but moving strategically can help you make the most of it. Exploration allows you to locate settlements, find extra crew, and also encounter the occasional sea monster. Finding the sea monsters is important, because they’ll attack your settlements after the pirates if you don’t deal with them early enough. Once you’re out of movement turns, it’s time for the pirates. 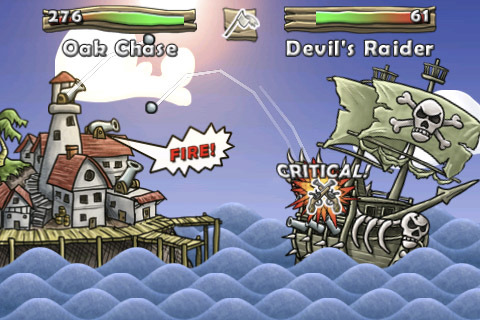 Combat consists of blasting the salt out of the pirates and sea monsters by tapping the little “FIRE!” symbols on the cannons. This can either happen in a settlement or on your ship, but the mechanic is the same both places.

It’s an easy and quick game to pick up and play, with each of the levels only lasting a few minutes at most, but gameplay becomes repetitive all too quickly. After awhile, it begins to feel like a mildly complicated version of Minesweeper, which is frustrating from such a high-profile developer. The graphics and sound aren’t bad, and there’s a considerable amount of content with 60 (often quite difficult) levels, but Stoneship is just too simple to be truly satisfying and too complicated to be an addictive diversion.

Bottom line: Myst fans are going to be very disappointed, and everyone else is going to go “meh”.