Besides their horned helmets, all you really need to know about vikings can be summed up in three words: beards, battles, and boats, and Viking Tales: Mystery of Black Rock provides plenty of that, but mostly boats. An action game that is largely about rowing and navigation more than anything else, Viking Tales sets you plundering the high seas with a fearsome crew of hirsute Scandinavian battle beasts and their trusty longboat.

To play, you control a single mighty Viking ship. Each level has you exploring the seas and pursuing a different objective each time. You might be trying to destroy the evil Scummson tribe or attempting to rescue shipwrecked comrades, but all around you are dangerous icebergs, rocks, treacherous islands, and tricky fjords to navigate. As you successfully complete missions, you can upgrade your ship and ready your crew for more daring and dangerous adventures. 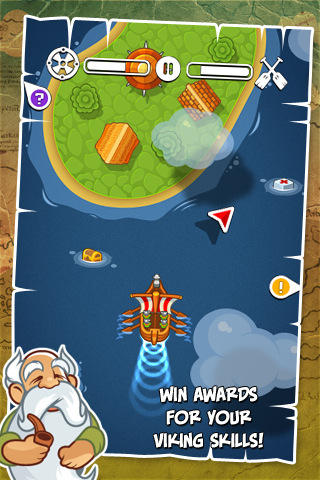 Pillaging villages may get all the glory, but for a true viking, it’s all about proper oar technique, and this game gets you plenty of rowing practice. To properly steer the ship, it helps to think of the controls a bit like paddling a canoe. A single fingered swipe down the center the ship propels it forward, while swiping to either side turns the ship in the opposite direction, so if you want to turn left, swipe on the right side of the ship. A mighty two fingered swipe while straddling the ship will cause it to zoom forward quickly, but beware of overuse, because this eats up your crew’s stamina and makes it harder to avoid obstacles.

Your ship maneuvers about as gracefully as an obese cow on snowshoes, which is to say that getting the hang of the controls can take a bit of practice, but unfortunately, there’s not much more to the game aside from rowing your ship around. There is the occasional ship battle, where you must navigate your ship next to the enemy and then tap their ship to fire your cannons, but even that tends to be more about making your sure your ship doesn’t crash rather than strategic combat. This isn’t to say that the game can’t be fun, but it’s highly repetitive in action. 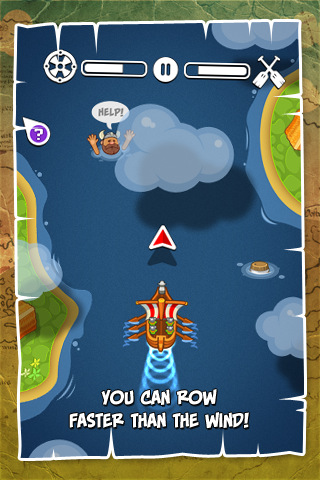 The initial tutorial levels are very simple, giving you a chance to learn the controls, but once you get into the actual game, it’s a fair challenge to get through each mission before running out of time or smashing yourself to bits on the rocks. Throughout each level are also random treasures and items to collect, which are nice, but also distracting and often tricky to retrieve without causing your ship damage.

Overall, the game is enjoyable, but it takes a long time to get into. Although the graphics are cute and attractive, the story falls very flat, and the action just drags while you’re struggling to get the hang of the controls. If you stick with it, the game does eventually justify its affordable $0.99 price tag, but don’t go in expecting a mind-blowing viking saga from this lightweight game.

Here is a video demo of the Viking Tales: Mystery of Black Rock app on the iPhone