“Hey, Lincoln Logs! Long time no see! Have you met my good friend Tetris? Oh, I see you guys know each other. What? You guys dated? Seriously? You even have a kid together? I had no idea! Aww, Build ‘n Bash is such a cute name! Sure, I’d love to see a pictu–whoa, okay, now I see why you guys broke up. Yikes…so, uh, how ’bout them Red Sox?”

I know, it sounds like such a good idea, bringing those two together, but I assure you, the results ain’t pretty. For whatever reason, the combination just spits out an architectural mess the likes of which Jenga could not even imagine. 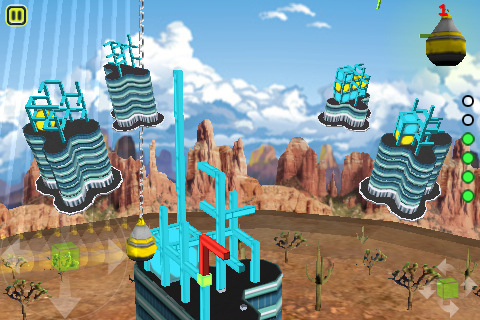 It works roughly the way you imagine merging Tetris and Lincoln Logs would. Beams fall from the sky, and you are responsible for putting them together in such a way as to create a tower. Beams connect at certain anchor points, so you use the directional pad to rotate falling beams and then slip them into place, whistling while you work your way upward. Build a certain number of floors within a set time and everything is peachy.

Trouble is, the controls are uniformly awful. Not unplayable by any means, just seriously clunky and unpleasant to use. The mental joy you get out of setting a beam just so is all but obliterated by the massive headache of trying to rotate and position. Additionally, adjusting the camera requires a move set all too similar to dropping beams into place, two key features that should have stood out to developers as a disaster waiting to happen.

Things swiftly go from bad to worse when you add an opponent into the mix. Whether you’re playing against the computer or a human competitor, the control awkwardness only gets magnified ten times over when destructive elements get introduced. As you’re rushing to build, you can also unleash things like giant anvils or wrecking balls to try to crash into your opponent’s building, but, of course, they can do the same to you. Put it all together and you end up with a construction nightmare.

All of this is really rather unfortunate when you consider that the game itself looks so promising on the surface. The 3-D graphics are surprisingly crisp, and the premise itself had a lot of potential. Unfortunately, the very best idea in the world falls apart through poor implementation. Long story short? Build ‘n Bash looks pretty enough, but it’s going to need a massive control overhaul in order to be a functional and fun game.