To call Osmos an ambient game is something of a misnomer. To be sure, the game was designed and heavily marketed as a kind of trance-inducing cosmic experience. Certainly the gorgeously glowing graphics and lush electronic soundtrack contribute to that image, but the playing experience is a lot more stress inducing than I ever would have imagined from such a serene looking game.

You’ve probably noticed some of the hype around Osmos from Hemisphere Games, as it’s been around for a little while now, first as a PC experience and then as hit iPad app. There were some reservations when it was made available on the iPhone, largely due to the smaller screen and less immersive experience, but given its great success since launch, I think most of those fears have been laid to rest. But why all the love? And is it worthy? Simply put, yes, and no, but mostly yes. Osmos is undeniably beautiful and engaging in an oddly profound manner. 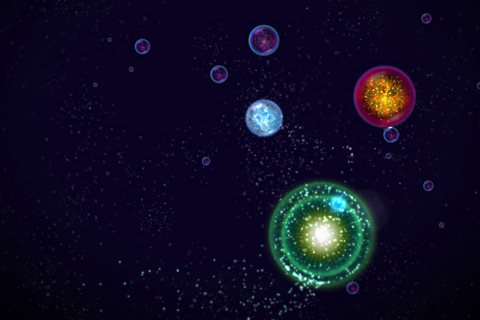 You play as a “mote”, a tiny sphere of sentient liquid in the blackness of space. All around you are other mote-like creatures, some larger than you and others smaller. Rather like the Katamari games, you can absorb smaller motes to make yourself larger, eventually able to absorb bigger and bigger motes. Naturally, the reverse is true as well, so you want to avoid large motes lest you get sucked in. No doubt there’s some deeper social commentary to be made there, but mostly I was focused on the fantastic physics engine.

The game starts out with a quote from Isaac Newton, and it’s clear Sir Isaac is the patron saint of the game. To move in a particular direction, you tap behind your mote, causing it to expel a tiny bit of matter. The more you tap, the faster you go, but the more mass you lose. Inertia dictates that once you start moving, you don’t stop unless you push it again or your mote runs into something. Movement is dreamlike and generally slow, like shooting pool balls through mud, but various attractors, repulsors, and other intelligent motes also add in a significant amount of additional challenge.

Once you start actively chasing motes Osmos shifts from tranquilizing to mildly frenzied, which is rather unfortunate. Slower levels tend to be really slow, to the point where you’re encouraged to speed up time to complete them. These levels are rather more successful, because they are most in line with the deep, contemplative feel of the game. The soundtrack, as I mentioned, is trance-like and beautifully relaxing, which puts it at odds with the manic tapping required in the faster paced levels.

All in all, Osmos is a gorgeous and special game, but the pacing just isn’t quite everything it could be. It’s like an ambient mist wrapped around pockets of explosive energy; not bad, necessarily, but all the more jarring because of the intensely dreamy atmosphere around it.