It’s a miracle! A match-3 game that is genuinely interesting! Match-3 games are some of the most overdone and deathly boring in the App Store. The early success of Bejeweled served as the bland inspiration for lazy and uncreative developers everywhere, but no more! Babo Crash HD is here to save us from a genre that has languished for too long!

It’s not that Babo Crash HD offers a whole lot in terms of major innovation, but it takes a lot of neat elements and puts them together flawlessly and makes them Universally available. The big differences between Babo Crash and other match-3’s is the brilliant interpretation of power-ups and utilization of the accelerometer. 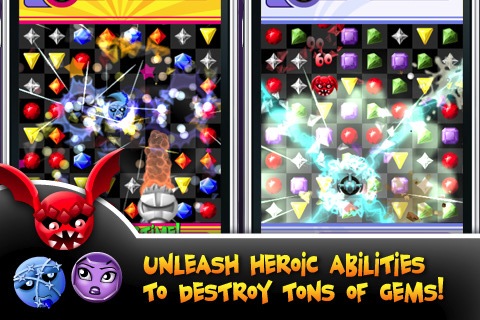 Power-ups appear in the form of Heroes in the game, circular figures that pop up when you match 4 or more gems of the same color. Use the color coded Heroes in a match and you activate them. Every Hero has its own particular power, complete with splashy effects and sleek animation. Other games have used power-ups, but rarely to such great effect.

Heroes are also directional, meaning that you can rotate the iPhone to change the gravity of the playing grid and send your Heroes launching in various directions. Some Heroes even let you roll them across the screen in a frenzy of highly satisfying destruction. You can do this at any time, not just with the Heroes, and the ability to rotate at will adds a surprising amount of action to the game. 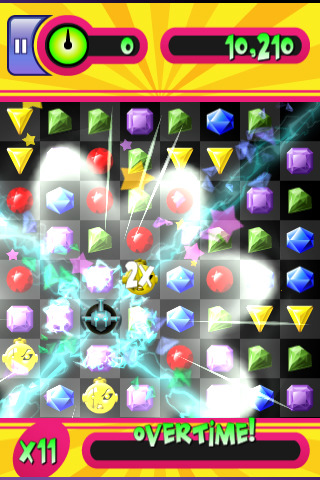 Added challenge enters in the form of vicious Chompiis, obnoxious creatures that infect gems and transform them into immovable lumps. Thankfully, they can be destroyed through Hero power or by making a match with a neighboring gem. Once things really get going, the screen is alive with lights and colors as things explode left and right, so it’s not ideal for someone looking for something more sedate, but fantastic if you’re craving a more dynamic experience.

There are three different playing modes to choose from: Crash, the normal level progression, Relaxo, which takes away any time limits and Chompiis, and Rush, which gives you a single intense 75 second level to crash your way through. All this allows you to tailor the time to your liking, but there is no survival mode, which is a little disappointing.

That said, this is easily one of the best match-3 games I’ve ever played, and I very genuinely enjoyed it, which is saying something. Really, the only thing I wasn’t totally wild about with the game was the thumping electronic soundtrack, which is perfectly fine at first, but it gets a obnoxious after awhile. Still, it’s a minor quibble at best, and to find an exciting match-3 is a rare and precious thing indeed.