This is a phenomenally good match-3 game. I don’t really like match-3 games, so consider this a fairly profound statement. Imagine if Puzzle Quest, instead of taking inspiration from classic RPGs, decided they preferred playing Civilization instead. That’s kind of what you get with Heroes of Kalevala. It’s much more basic than Civilization, of course, but you still get a simple world-building game with some astonishingly good match-3 puzzles.

Developed by MythPeople and distributed by 10tons LTD, these are the same folks that brought you Azkend, so they definitely know their way around a puzzle game. They’re also remarkably adept at weaving in elements of mythology into their games, so even though Heroes of Kalevala only has a story in the loosest possible sense, it has Finnish myths and legends pouring out of its ears. 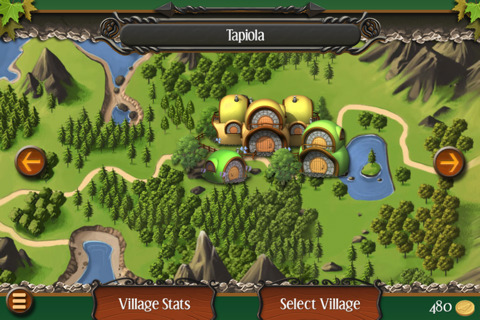 Even if you don’t know the first thing about Finnish mythology, you’ll still be pleased by this gorgeous game and its robust set of puzzles. Like many match-3 games, you have to turn all the tiles blue by matching symbols. Of course, it’s never that easy, and there are a wide variety of hazards to hinder your progress. Blocks of ice, chains, and, my personal nemesis, the bubbling tar which spreads over time if you’re not careful.

There is also an evil witch who constantly sets her pet crow on you. The crow acts as a timer of sorts, steadily burning away the border around the puzzle grid. If it burns away the entire border, it’s game over, but it can be knocked out by making a match beside it to buy you some more time. 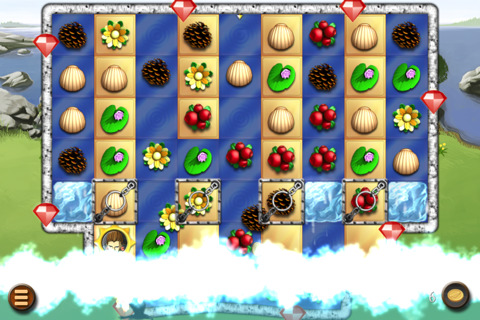 Gods, goddesses, and heroes also play a major role, as you unlock them over time. Once you’ve selected a hero at the beginning of the level, you can call upon them during gameplay by making a match with their tokens. They each have a special ability which can mean the difference between success and failure, and the relative difficulty of the levels ramps up very quickly and remains challenging throughout.

As you successfully complete levels, you earn coins, which you can use to develop a series of villages. Each village is unique, with its own distinct look and set of unlockables. You are responsible for building houses for your villagers and keeping them happy, and they reward you with increased bonuses after every level. It’s not Civ V or even Build-A-Lot, but it’s a cute and interesting addition to the match-3 genre. My only disappointment with the villages was that they weren’t really connected in any way, which took away from the world building enjoyment.

That said, I really enjoyed this game. In addition to a fun and fresh take on a classically dull gameplay, the visuals are utterly fantastic, and it even comes with a rich and beautiful soundtrack to enjoy. It’s one of the few games I can think of where I was more than happy to leave the sound on. As I said in the beginning, this is a phenomenally good match-3 game, and if you’re at all drawn to puzzle games, Heroes of Kalevala is well worth checking out.