Hit the Apple is a game app about an archer who tries to hit an apple off a guy’s head. This is an iPhone, iPod touch, and iPad game that uses Open Feint and is released by Falcon Mobile Inc. How often have you heard the story of William Tell where he had to shoot an apple off his son’s head? How often have you imagined the son getting shot in the face by an arrow? Yeah, this game contains that. You aim using your finger to both change trajectory and power of the arrow shot. The target is always off screen so you have to roughly estimate your shots.

The best part of the game is the fun of shooting an arrow into a guy’s face and it DOESN’T kill him. Instead, he stays standing there waiting for the next lethal head shot. You can hit the guy in the leg, body, and groin multiple times, but he just never seems to punish you for it. Instead, he has a life bar. If you hit him too often, he will die. The audio in the game is funny though when you do hit the little dude by accident. 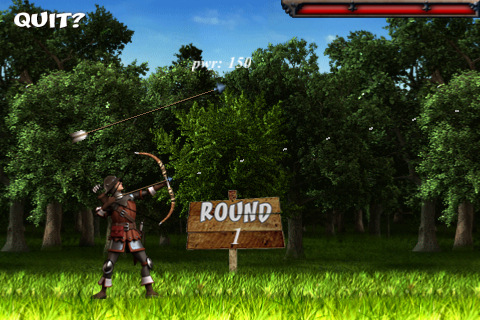 The target in the game is completely off screen. This is irritating and devolves the game into random shooting then smaller and smaller iterations to hit the apple. This system doesn’t work well for a game based on precision and high scores. It would be better if the game let you zoom out or place the camera anywhere you’d like to make precise shots.

The title screen and the icon are of this cartoonishly macho, blond Arnold Schwarzenegger-style character in full Knight armor. In game, there is a generic archer guy with realistic proportions and the rest of the levels are all based in realistic tones. Nothing seems to match the title screen or the icon which are nicely done. What gives?

Overall, this isn’t a very fun app. Most of the time, I just aimed relatively high, then slowly adjusted the aim till it hit the apple on the guy’s head, or I’d try to shoot him in the face on purpose and watch as he crumples to the floor. That’s the entertainment in this game, killing some nameless guy who has no real importance to any narrative or story. It’s just aim, shoot, miss, shoot again, hit, move on, boredom sets in, try to kill the guy. Maybe if the look of this game was more fun and interesting, I’d give it a 3 or a 3.5. At this point, the ‘realistic look’ sucks all the life and interest right out of this app. More gameplay options, the ability to zoom out, and consistent art direction is needed.

Here is a video demo of the Hit the Apple! app on the iPhone

This 3rd Party App is available at the Apple iTunes AppStore. Browse the full list of all AppStore apps filed under the AppStore category.
Download Hit the Apple! at iTunes App Store
Price: $0.99
Developer: Website
AppSafari review of Hit the Apple! was written by Joseph Ho on August 12th, 2010 and categorized under App Store, Games. Page viewed 4601 times, 1 so far today. Need help on using these apps? Please read the Help Page.