Cannon Fighter (or Canon Fighter according to the app icon) is a shooter game where you play as a high tech tank as it fires and destroys airplanes and jets that try to kill it. You collect hardcore power-ups and exercise your right to shoot giant laser beams and missiles into the sky at random! Released by iMECA, Cannon Fighter is available for the iPhone and iPod Touch and sells for $1.99 at time of writing.

The game’s graphics are sharp and stylish. The user interface is extremely clean and well done and the tank itself looks like it was ripped right out of Metal Slug. It’s unique and flows well with the techno music. It’s the future… of course there’s techno. So just to move on, the graphics and the sound are top notch and extremely well done. 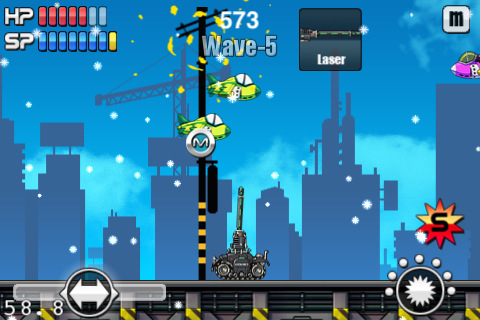 The game starts off with a White and Blue screen with interesting buildings and vehicles. You hit NEW GAME and you go to Mordern, a city level. Tap to start and BOOM, you instantly start in the game. You see a Left-Right arrow at the bottom and realize that it’s the main control. In the other corner, you have a circle with smaller circles around it. That controls your aim. The first jets fly by and you start firing and moving away. That is when you start noticing it. It is REALLY awkward aiming.

Have you ever played an app game with a joystick interface? Ever notice that the joystick allows you to move more naturally than, say, a slide bar or buttons? It’s because you move your finger around very naturally. This game needs that. Instead, it’s aiming is stiff and unresponsive and most of the time, you’ll be trying your hardest to force the gun to the other direction while the enemy jets fly past you.

There is a RPG style leveling system where you can increase your Health points, your Special points (which allow you to fire a beam into the sky at the cost of the points), speed, and cannon power. I have to say, the speed attribute was the first thing I tried to upgrade because the tank is very VERY slow. Even after hitting level 3 upgrade to speed, the tank was slow. Attacks are hard to avoid so you end up having to rely on the stiff aiming to destroy missiles and projectiles, and moving to collect items that drop from jets is a huge chore. You are usually moving away from enemy planes and blowing them up diagonally so you aren’t directly under their fire and so that you can actually have enough time to destroy them. The power-up falls directly from underneath them so you end up having to chase it quickly. You end up having to play dangerously just to collect items. 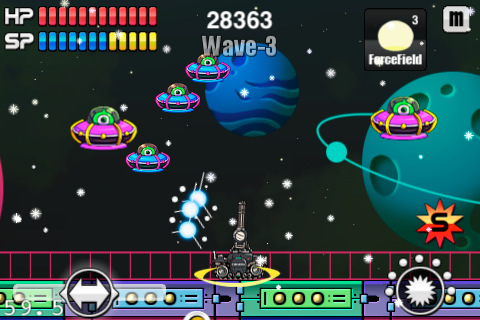 The greatest part of this game are the power-ups. The aiming suddenly becomes a thing of the past when you unlock the nearly instant-kill missiles, lasers, and giant orbs of lights. The weapons appear to have no ammo count so you can fire as much as you want until the power up disappears on its own. The destruction and chaos is what makes the power up such a joy and really, the true savior of the game.

Overall, the power-up system is excellent and leaves you feeling satisfied and nearly invincible. A faster tank speed and more responsive controls would be great improvements. All of it could be fixed with a joystick style aiming mechanic where the direction you aim the stick at is the direction you fire.