Giant Hamsters rolling down the streets of Tokyo firing glowing spikes at Highschool gangsters and J-pop ganguro girls who set off bombs and teleport down manholes! If that last sentence makes sense to you, then you just might love Meow Meow Happy Fight. This is a shooter/arena battler with powerups, unlockable characters with different strengths and weaknesses, and Open Feint leaderboards. Meow Meow Happy Fight is available for $0.99 at the time of review. 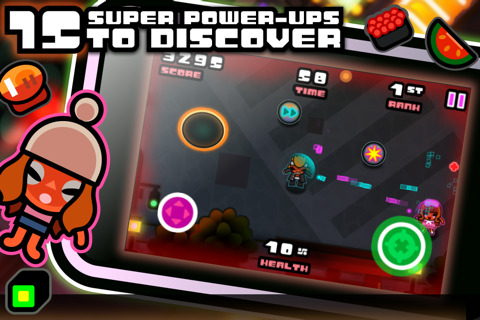 The art in Meow Meow Happy Fight is the main attraction and boy is it crazy. Stylized doesn’t do this game justice. Hugely bold outlines with bright colors, three-tone shadowing, sushi, burgers, hamsters, and ramen bowls really make this a Japanese pop culture mash of color. It is a crazy feast for the eyes for sure. Every one of the 30 levels in the game looks really great with beautiful trees, streets, flowers, and other really wonderful cellshaded/gradient colored objects.

The game itself plays in an unexpected way. You first choose one of a huge cast of characters. You have 3 available characters, though they are the weakest in the game and then you just start the game. You control your character in a bubble shield. As you move around with the left joystick, you use the right joystick to shoot in any direction. Your goal is to arena battle against other bubble people and try to rack up the highest amount of kills.

The combat is essentially run around your opponent avoiding their never ending stream of near-perfect fire while trying to destroy them. You’re main strategy is right there. Circle and rotate around a single target and try to kill them before they kill you. This is hampered, usually, by the 3rd player who will constantly fire upon you. They seem to take you over any other player if you are on the screen, which makes it nearly impossible to not suffer massive damage. 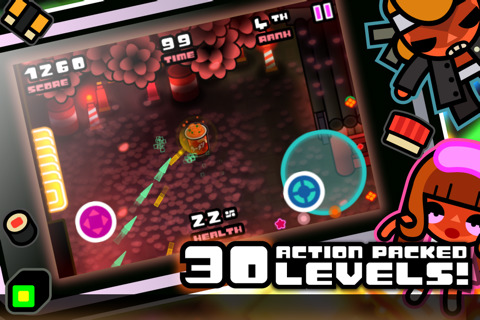 The gameplay can get slightly repetitive but luckily, the highly stylized art makes you actually want to see what new content will unlock as you progress. Characters play similarly, but many of their stat strengths do show themselves in game, though in the end, you are still being shot constantly while you spin around a guy trying to kill them.

Meow Meow Happy Fight is a simple game with a simple game style with really well done art that has a charming appeal. The music is great, the powerups look kinda cool, and the concept is worth exploring. The game can be improved by the addition of more combat mode strategic options.