MMORPGs are sort of hard to come by in the App Store, but there are a few floating around. I have a theory that once someone manages to bring a full World of Warcraft MMORPG experience to smartphones, the world as we know it is going to end. Until that point, we must content ourselves with smaller scale MMOs like Pocket Legends that, as of yet, only hint at what is to come. 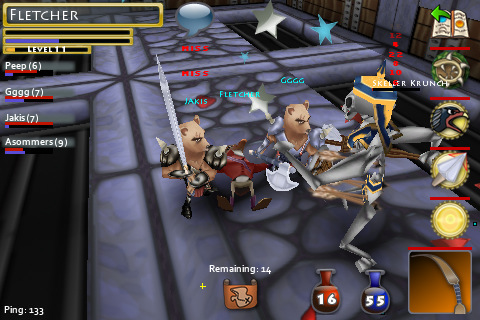 A freemium MMORPG, Pocket Legends isn’t anywhere near the vast complexities of WoW, but it does bring an affordable and generally satisfying MMO experience to your pocket. The game is free to play, but unless you purchase the additional level packs, character levels are capped at 13, which actually provides a very generous taste, but it’s definitely something to be aware of from the beginning.

It is essentially one long dungeon crawl/loot-fest, so if you’re all about smiting baddies and collecting treasure, you really need to get on this one. Instead of a large open world, there is a small camp/lobby area where you can interact with fellow players in a non-combat setting, and from there you have the option to enter into available dungeons with other players and lots of enemies to obliterate. There’s not a lot of story, and the overall layout isn’t super traditional and fairly simple, but it gets the job done.

Combat is also similarly simplified, but you’re still going to miss having a keyboard and buttons. Combat relies pretty heavily on auto-targeting, and you’ll spend a lot of time fussing with the on-screen menus. The HUD takes up a fair amount of real estate, and it can feel a bit crowded at times, which sometimes results in accidental potion use and the like, but it functions fine for the most part. The joystick movement is also reasonable, but nothing spectacular. It tends toward the easy side, but there’s even an auto-attack option if you really don’t want to try that hard. 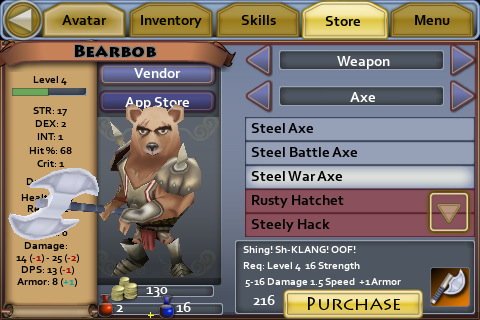 Overall the graphics are quite sharp and the gameplay is actually quite balanced. Even without paying for anything, it feels like a full and immersive experience. Loot and experience is shared, so finding people to play with is actually surprisingly easy.

As you might imagine, the game does require constant 3G or wifi access to function, but if you have a steady signal, the connectivity is actually pretty good. There’s generally not a whole lot of lag during combat, although menus can be a bit slow to load at times.

It’s not a substitute for Warcraft by any means, but Pocket Legends is definitely a nice little supplementary MMO for those times when you don’t have a computer in front of you.