Hyper-bright colors, creating colorful paddles to bounce your strange ball-man to move through crazy levels by controlling you trajectory and speed. A big bad boss guy comes and kidnaps your friends and family, destroys your home, and leaves you to explore levels to get to him, fighting off his minions. Released by Enter-Brain-Ment, Somersault is available on iPhone, iPod touch, and iPad for $2.99.

When any app is selling for more than $1.99, I tend to look more carefully to see if the app is worth the cost. I suppose that once you the price tag of a drink from a restaurant, it becomes harder to brush off if the app turns out bad. Somersault is a mixed game of really nice strengths but also has some weaknesses. 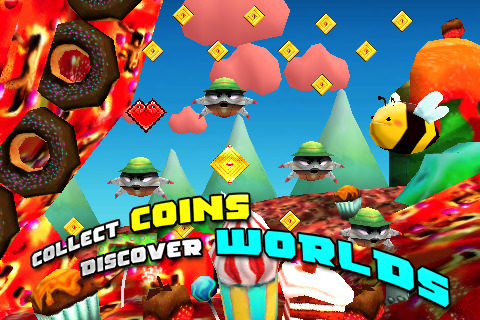 Looking like an armored Don Patch from Bobobo-bo Bo-bobo (yes, it’s a real anime series, and yes, that’s its name) you play as Flip Fullfeather, a bouncing hero that you draw paddles for on the screen to help bounce him through a level. The longer the paddle, the further and faster that you’ll bounce Flip. The story is that Dr. Proto comes and takes over with his machines of doom.

The graphics for the environments are extremely bright and colorful, but because of the camera’s zoom, I can almost never tell exactly where I’m supposed to go. The story is surprisingly epic, but then why is there a high score system with OpenFeint if it’s a story mode? Why is collecting coins so important when they don’t directly affect gameplay? It feels like a very tedious hunt when the controls are paddle and angle-trajectory based. 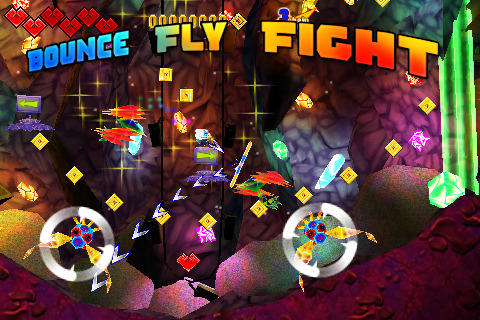 The first level looks really nice, showcasing the inside of a person’s kitchen, but why am I there? I just watched machines invade Zerg-style onto my planet, so why is the tutorial level in a kitchen? Maybe it’s out of sequence? Where am I? Why are the villagers in level 2 completely nonchalant about the invasion? Level 2 ends with the doctor coming in and burning the level, literally chasing you out of the stage… why in Level 4 after watching your friend die, you start the level with a ‘yippie’ jumping sound effect? You just saw a town burn and you got attacked by a supervillain. You just watched as a friend died in your arms… so ‘Yippie’?

The tone of the game does not match some of the rather dark story elements. It’s interesting as heck to find out what happens further in the story, but there are a lot of tonal shifts and it’s jarring to see a cute ball guy die. Graphically, the characters don’t hold up well to super-zoomed in shots, but overall, the environments look good. Sounds, though confusing at times when placed around dark storyline developments, are good and cartoony.

It’s far from perfect since it brings up so many questions, but I was interested in what the game would throw at me next. Draw a platform controls are tricky to master and usually result in random spamming of paddles to get Flip going to direction you want it to, but it works cleverly in boss encounters and on certain levels where you have to tap enemies to kill them.

I was confused by some elements of the game, but Somersault is still a solid platform game. I wasn’t impressed by the graphics or the linear storyline, but for an iDevice app, it might just be worth the $3 investment. If you think you’ll like this game, go for it. It’s almost worth it to see some of the juxtaposition of dark and horrifying story lines to the cute and bouncy silliness.