Black White West came out of nowhere. I had no idea what I was getting into when I first started up this wild-west stylized distance game. This is a Limbo-style black and white game with one of the simplest obstacle: Jump over cactus and go the distance. Released by Unusual Things, Black White West is available on the iPhone, iPod touch, and iPad for $0.99.

The art is striking. Black silhouettes, three guys on a horse that constantly pees, a field of sharp cactus, the white roots under the cactus, the random text emoticons that pop up with a fun little “Yee-haw!” sound effect, and of random birds that fly around you. This is a very striking game indeed. 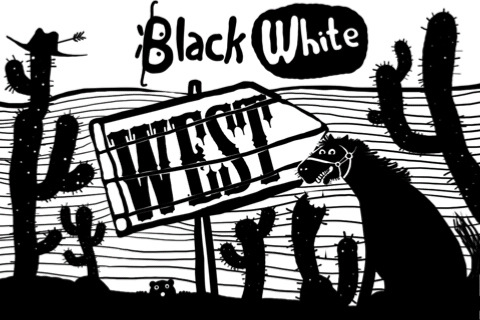 The controls are simple. Tap the screen to jump. When cactus appears, you have to jump over them or lose one of the men on the horse. The most complex part of this game is that when you land directly on the cactus with your horse, you will crush the cactus and none of your characters will die due to this. Many times, the cactus will be grouped extremely close together and you have to land on at least one of them to get through it intact. This isn’t explained anywhere in the app itself, but rather, it’s listed under the description in the AppStore. I realize that when you purchase a game, you normally read these things first, but honestly, I am one to believe that all elements of the game should be explained in-game. I don’t know, it’s just for user friendliness and alleviating confusion. 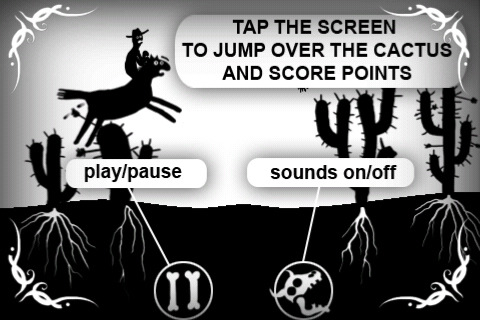 The music is a strange blend of silliness and country music. It goes perfectly with the cowboy hollers and yee-hawing and the bouncy sound effects are memorable. There is a mute button what has a cow head opening or closing its mouth. Clever way of disguising the interface buttons to fit the art direction of the game. I liked it.

I really love the art style of Black White West. I wish there were more games based in the Limbo art style of high-contrast black and white art. This game could use some more of that creepy dark atmosphere though to juxtapose the silly cowboy nature of the game. Dark gray backgrounds like a ghost town, a destroyed train track, or maybe even just more desert backgrounds with disturbing dead things could liven up the background and really set a two-tone style. I would love to see different obstacles rather than just cactus, like animal bones or enemies. This iDevice app could use some more substance since it does cost money.

Black White West is a fun, heavily stylish distance jumping game with a wonderful appeal but rather shallow gameplay. More details in the background, more stuff to jump over, and maybe some kind of explanation of your horse’s immunity to cactus would be a welcome update. I look forward to it.