Unpleasant Horse is a cute game for the iPhone, iPod touch and iPad. When I think of PopCap Games, I sort of imagine the employees to basically spend most of their time rolling around on piles of cash and precious gems, given than they are responsible for some of the best selling casual games of all time (Bejeweled, Plants Vs Zombies, etc.), but as it turns out, even a really successful gaming company needs hobbies.

To distract themselves from their massive popularity and great riches, PopCap decided to organize a little competition for their employees to see if they could create a complete game in 24 hours, based on the theme “Unpleasant horse racing through the sky.” They must’ve liked the predictably twisted results, because a few weeks later, the game was released out to the world for free under their “edgier” 4th and Battery line with the wildly descriptive name of “Unpleasant Horse”. 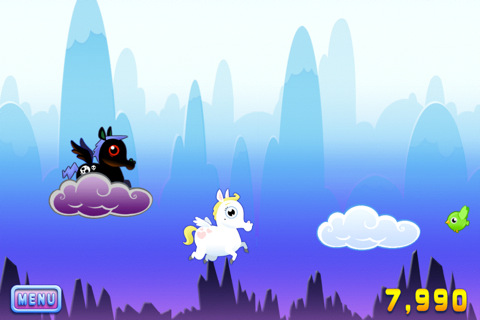 Note to parents: this is not a happy pony princess game; the game contains much cartoon blood, guts, gore, and general unpleasantness to big-eyed fantasy creatures.

Unpleasant Horse is a bit like the mutant lovechild of My Little Pony and a death metal concert. You control an appropriately unpleasant winged horse who generally lives in the sky jumping from cloud to cloud. Apparently winged horses don’t just live in the sky because of the pretty scenery; the ground is composed of a rusty nightmare of flesh-rending sawblades.

The point of the game is pretty simple, just keeping jumping and try not to die. You can jump from cloud to cloud pretty easily, but usually you only get one jump at a time and the clouds can be very far apart. Luckily, you’re very unpleasant, so you have no qualms about jumping on other animals to give you an edge. Landing on a bird gives you a feather which you can use up for an extra mid-air jump. You can also land on another horse provides its own special brand of excitement.

When you jump on the backs of obnoxiously pleasant and innocent horsies, they start to fall like a rock, and you can ride those poor suckers all the way down to the horrible bone-crushing floor. You just have to be careful to spring away before you’re ground into sausage meat as well. 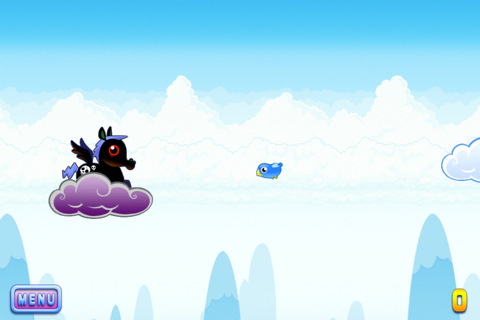 It should go without saying that the game definitely has some fairly dark tendencies. You score points according to how far you travel, but also how many birds and horses you take out. Yet another take on the endless jump concept popularized by Doodle Jump, it’s obviously not the world’s most original concept, but while there isn’t a whole lot to the game, the general performance is sound, the saccharine-goth artwork is gleefully deranged, and the price tag (FREE!) is great, so what are you waiting for?