It’s a story old as time: a nice young couple buys their dream house only to discover that it’s haunted by mysterious forces. If there’s something strange in your neighborhood, who ya gonna call? GHOSTBUS-no, actually, looks like you should call a strange little man named Milton Hobblepot, ghost hunter extraordinaire. This is the general premise of Mishap, a new hidden object game released by cross-platform powerhouse Namco.

Without a doubt, Mishap is one of the slicker hidden object games around, thanks to polished visuals, professional voicework, and added mini-games which help nudge Mishap towards the top of an increasingly crowded genre. It’s not an especially original game by any means, but it takes the familiar formula and does it well. 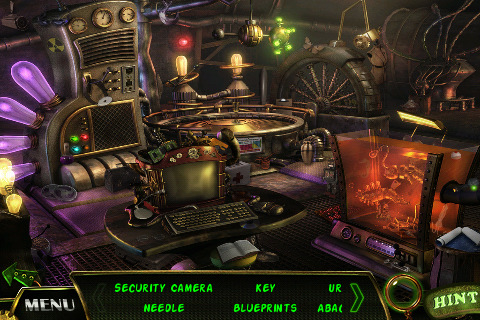 For one thing, the visuals of the game are top notch for the genre. Although the playing area feels very cramped on the iPhone screen, the graphics are clean, clear, and beautifully executed. In addition to your run-of-the-mill object search, there are hidden ghosts to capture with the aid of a accelerometer-controlled spectral spectacle, crazy gadgets to construct, and enigmatic riddles to decode. As you work your way through the rooms and clear out all of the sneaky spirits, you’ll also encounter various mini-games which help break up the occasionally monotonous squinting and keep the action feeling fresh. 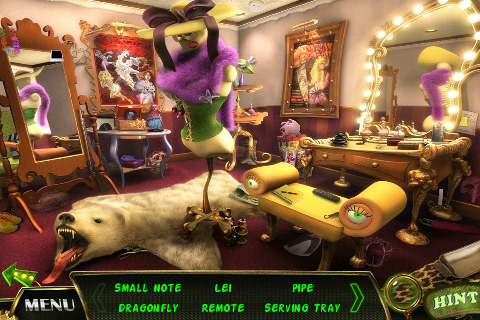 My one real complaint about Mishap is the precision tapping involved. Although this is almost certainly less of an issue with Mishap for iPad, playing Mishap (and to be fair, really any hidden object game) on the iPhone is a major challenge. It requires near constant zooming and it’s not uncommon to accidentally mistap during the time-sensitive mini games.

That said, Mishap is undoubtedly one of the best hidden object games in the App Store. The visuals and sound are first rate, there’s a rich story to follow along with, and the general touch and tilt interfaces work well, even when hampered by the iPhone’s limited real estate. The replay value of the game is limited, however, which is something to keep in mind given the relatively steep price tag of $4.99 for the iPhone version and the even steeper price tag of $7.99 for the iPad version. All the same, Mishap is easily on par with the best of the PC hidden-object games, which regularly retail for $20 bucks a pop, so it’s still not a bad deal, all things considered.