Film trivia and cats together at last! I’m actually not much of a cat person, but I’m way into film trivia and I completely love this app. It’s not that I don’t like cats, but they usually transform me into a pathetic blob of phlegm and hives, so I’m grateful when I can get my cute feline fix without being exposed to all the allergens, so far as I’m concerned, MovieCat! is made of win.

In all seriousness, this is just about the most artistically satisfying trivia game I’ve seen in my life. It just oozes crisp, clean, and outrageously cool style. MovieCat! was developed by the same folks behind Filmwise.com, site of the popular Invisibles puzzles. Unlike most pop culture trivia games which just feel like soulless corporate trash, these folks clearly know and love movies, and they’ve spent a lot of time creating a trivia app worthy of them. And they’ve added cats! 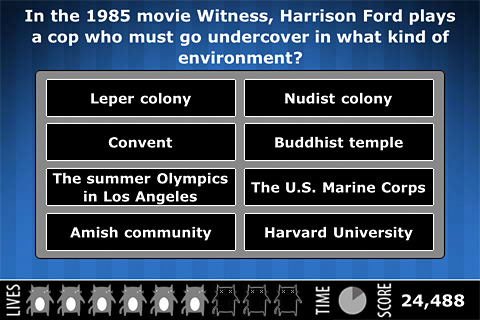 You start off by entering your name and then selecting a difficulty level, which affects how many of your 9 lives you can lose per puzzle. The trivia is broken up into 5 rounds, each with 5 different trivia challenges, and these are all different. Sometimes you’ll be called upon to answer a straight-up trivia question. Other times you’ll have to guess a movie title based on DVD chapter titles or match actors to their roles. Now the text questions are basic, but comprehensive, and there are enough of them that you don’t see any repeats for a reasonably long time, but the absolute, hands down, number 1, best challenges are the picture based ones. 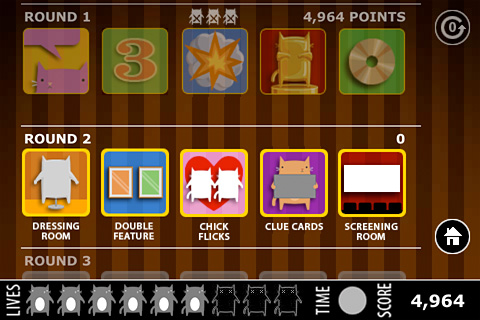 A few of the challenges have you identifying pictures where cats have replaced all of the main players. Sometimes it’s a scene from a movie, sometimes it’s a movie poster. My personal favorite are the costume challenges, where cat-shaped dummies are dressed in key costumes and you have to guess the film. All of the illustrations are ridiculously awesome and are what put this app way, way above other trivia games. 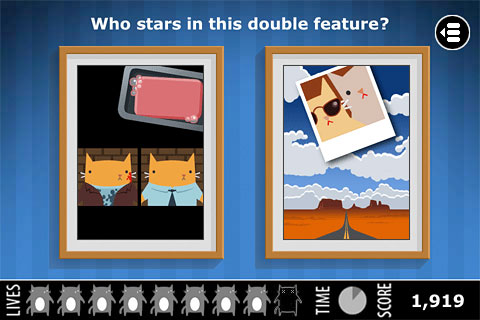 As with any trivia game, you do eventually run out of questions if you play it enough, but it took me many hours of playing before I saw even a single repeat. There is also an additional $0.99 question pack available for in-game purchase, presumably with the possibility of more being added in the future. And there are online leaderboards for all of you competitive types.

I really, really hope the future holds more MovieCat! goodness, because if you’re at all a movie lover like me, then you’re going to love this app to an embarrassing degree. Even if you’re not a cat lover, MovieCat! is a total must buy for any film buffs out there.