Tappi Bear All in 1 review

Sweeter than a kitten dipped in honey, Tappi Bear All in 1 is almost too cute for its own good. A series of 6 mini-games, with more in the works, there’s a surprising amount of content in this seemingly lightweight app.

Even with 6 different mini-games to choose from, the graphics are the biggest draw for this little candy colored confection of an app. The little bears come in a variety of shapes, sizes, and colors, and every single one is painfully adorable. If you can’t get behind the cutesy cartoon graphics and the bright color scheme, you might as well stop reading, because it’s the single best thing about the app. 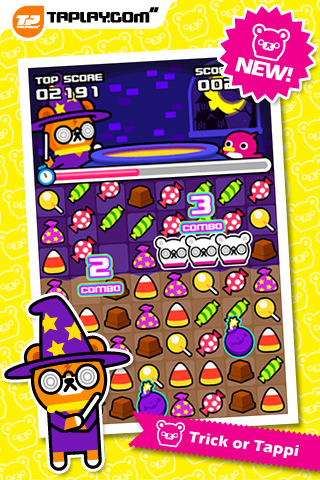 Of course, the mini-games aren’t half bad, but I would definitely emphasize the “mini” part. These are very basic, predictable games without a lot of variation. Each one only takes a few moments to learn, since all you really need is a lot of speed and a minimal amount of timing.

Space Rush has you zooming through space, picking up donuts as you attempt to avoid obstacles as they come whizzing towards you. Tap right, left, or middle to adjust your position and avoid a meteor in the face. 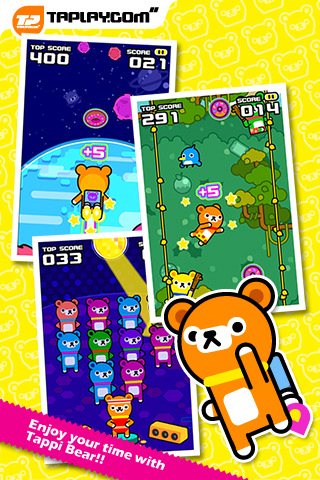 Donut Dance is a complicated version of the classic shell game. Keep your eye on the donut as it gets quickly passed around the dancing bears. Tap whichever bear has the donut when the music stops and you win!

Donut Ninja has you feeding ravenous ninja bears as they descend from above. Apparently stuffing their faces with donuts is a good defense against ninja attack. This also works on UFOs, for some reason.

Kung Fu Battle pits you against bears trying to steal your donuts, naturally. With careful timing, you can smack them right and left with your weapon to ward them off.

Tap Tap Jump is a familiar variation on the popular endless jump games.

And finally, the newest game, Chick Farm, has you frantically herding chicks out of danger from rampaging bears and a dirty mud puddle.

There’s plenty to do, but their extreme simplicity means that while they can be addictive, they also tend to get repetitive rather easily. Tons of Game Center achievements and a high score counter do help to milk every last bit of enjoyment from each mini-game, and the very low price of $0.99 for all of them makes Tappi Bear All in 1 a pretty excellent deal, especially since they typically charge $0.99 for one of these games. It’s definitely an affordable little nugget of light entertainment, but if you’re still unconvinced, you can try one of the games, Donut Ninja, for free and see if you like it.

This 3rd Party App is available at the Apple iTunes AppStore. Browse the full list of all AppStore apps filed under the AppStore category.
Download Tappi Bear All in 1 at iTunes App Store
Price: $0.99
Developer: Website
AppSafari review of Tappi Bear All in 1 was written by Tracy Yonemoto on November 6th, 2010 and categorized under Action, App Store, Games, Mini Games. Page viewed 4192 times, 1 so far today. Need help on using these apps? Please read the Help Page.