Nothing says Halloween like a Jack o’ lantern, but carving them can be such a pain. First you have to find a suitable pumpkin, then you have to go to all the trouble of carving them, not to mention the risk of slicing open your hands or burning your house down by sticking a candle inside of them. So Carve It! has stepped in to eliminate the muss and fuss of Jack o’ lanterns and taken them digital. They’ve even thrown in a minigame for when you get bored with carving pumpkins.

Carve It! is a simple kid-friendly app to let you make a Jack o’ lantern by simply drawing on the screen with your fingertip. To start off, you first pick a costumed avatar and make a profile for yourself. You can make up to 5 profiles, so everybody in the family can carve their own pumpkins and not share, and you can even have a friend carve as a Guest. 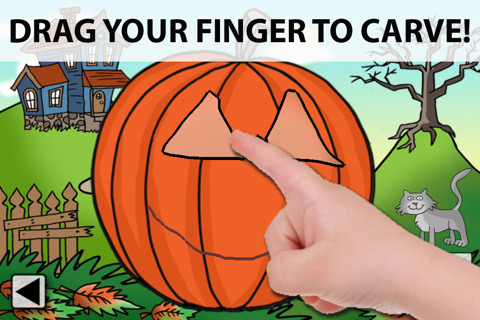 The next step is picking a pumpkin. There are only three to choose from, and they’re all of the round orange variety, so no fancy gourds, but you don’t have to clean out the pumpkin guts or any of the goopy mess. Once you’ve got a pumpkin, you can get to carving. The drawing interface isn’t great, so don’t expect a lot of control and fine detail, but there is a handy undo button in case you mess up. Once you’ve got Jack to your liking, you can stick a candle in him, save, and have him illuminating a spooky, slightly interactive Halloween scene. You can also email a picture of it to share with friends.

Once you’re done carving pumpkins, you can head over to the minigame that has you launching pumpkins into the air to collect coins and earn a high score. It’s a very simple game that takes all of two seconds to learn, but it’s a fun little extra. 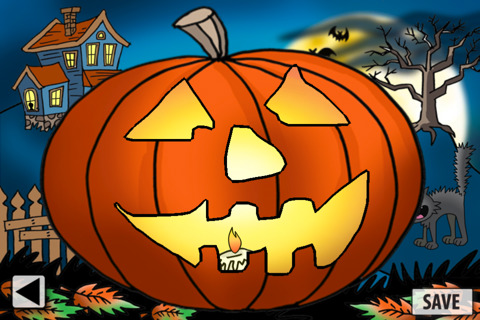 This is a Universal app, and on the iPhone, carving is a little more cramped than I imagine it would be on the iPad, but the interface is still only mediocre at best. Easy to use, yes, but the results are only so-so. The minigame is the only thing that is likely to keep you coming back, but even that is only basic at best.

Bottom line: It’s not my favorite Halloween app, but at least it doesn’t promote tooth decay.