If you’re a fan of the popular Minecraft game that is a favorite among hundreds of thousands of people, there’s a pretty high chance that you’ll love the iPhone app Junk Jack. Junk Jack is a relatively new app for both the iPhone and the iPod Touch. The concept is simple and very similar to Minecraft; gather your resources to build the world of your dreams and craft weapons and tools to help you master the game and defeat the enemies at nighttime!

In the sandbox-type environment of Junk Jack, you’ll start with a brand new world that is randomly generated (good for those who like a different challenge each time they play games), and you’ll get to immediately start gathering resources and other goodies for survival and building more creations. When first playing, you’ll immediately notice that there are two split environments in Junk Jack; a night time and a day time. The day time element of Junk Jack is optimal for gathering your resources and expanding your tool set as well as inventory. On the other hand, the night time element is specifically a time for surviving. You’ll have to fight off bad guys and defend yourself from dying, which can result in loss of some of your items. 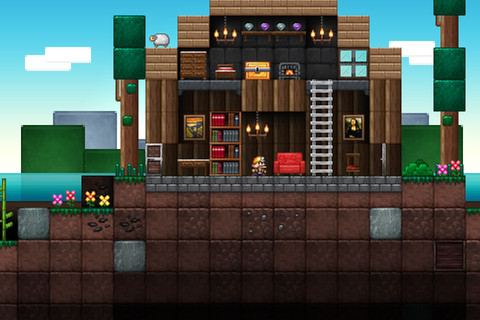 The game controls for Junk Jack are highly intuitive, and it’s very easy for practically anyone to easily get the grasp at a fairly rapid rate. You can easily move your character around by pressing and holding on either side of the screen, and you can even make him jump by flicking your finger across the screen upwards. You interact with your world by tapping on items, and gathering resources by repeatedly tapping on material blocks until they break for your use. 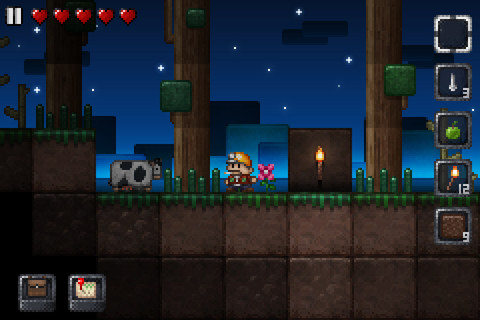 Around the screen of this fun iPhone app , you’ll find your controls for the application which are self explanatory and easy to use. Your map and inventory can be found in the lower left hand portion of the screen for easy access, as well as slots for items on the right hand side of the screen for your easy access. It’s best to place your frequently used items in these slots so that you can easily get to them without opening up your inventory over and over.

There is plenty to do in the world of Junk Jack, but what’s even better is that the developers have got even more in store for the application . Soon, there will be more features added to Junk Jack, such as quests, a farming system, cooking, and more. This iPhone app is definitely worth checking out if you’re interested in building your own world in the way that you want and defending it!