Imps get a bad rap these days. I mean, yes, they’re associated with all-purpose mischief and mayhem, but really, that’s what they’re designed for, so is it really their fault? You can hardly hold them accountable if they go around swiping magical orbs from shady looking wizards; it’s just in their nature.

KOP’s Imp Escape is a side-scrolling, line drawing adventure, in a similar vein as the popular Solipskier. Naturally, the game sets you to aiding the titular imp as he flees from the vengeful wizard. The wizard wants the orb back naturally, but the imp has other plans. 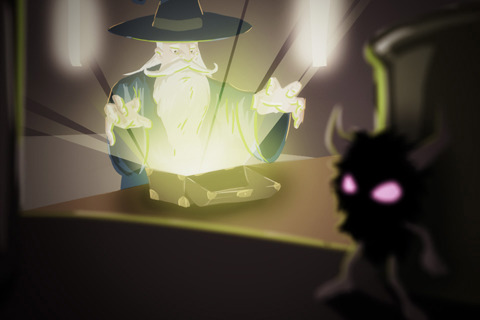 The controls are simple, just use your right thumb to draw a magical path through the sky for the imp to run along and use your left thumb to jump. Along the way are tasty flies to collect, scary monsters to avoid, and weather hazards in the form of clouds that cause your magical path to disappear. Collect enough flies and you gain special abilities, like the power to slow time or create magical platforms.

The territory is definitely hostile, and the imp is always in a rush, so you can expect death to come at you a mile a minute. Enemies are randomly generated, so the experience is new every time, but learning how to master the special abilities is very useful to get that high score. Of course, you should still expect the imp to go plummeting to his death or get crunched by ravenous plantbeasts on a fairly regular basis.

The touch controls aren’t always perfect, but the graphics are pretty, if somewhat generic. Imp Escape gradually introduces new environments as you zip along, so it feels a bit like you’re making progress, although the basic mechanics of the game never really change. Bog standard extras, like local and online leaderboards, and Facebook, Twitter, and OpenFeint integration round out the experience.

Overall, the game was pleasant, but nothing particularly special. The unlockable abilities make Imp Escape feel a little more like a platformer and slightly more involved than, say, Canabalt and Solipskier, but that also takes away from its underlying hypnotic appeal as an endless side-scroller. The graphics and sound appeal also aren’t nearly as attention-grabbing as Canabalt or Solipskier, but the markedly cheaper price tag of $0.99 to their $2.99 makes Imp Escape a more affordable alternative. Imp Escape isn’t bad, but it just doesn’t stand up to its flashier competition.