Astrowings is a gaming app that turns its player into a space jet pilot fighting in some sort of Galaxy war. It was developed by Livezen Corp., costs $1.99, and is compatible with an iPhone, iPod Touch, and iPad. There is a free, Lite version offered for those of you who want to sample Astrowings with half the features before making the full investment.

If you can imagine the arcade game Frogger in space, then you are half way to understanding what this app is all about. There are two sections to get into: Arcade, in which you are fighting to gain levels, and Time Attack, which is a sort of practice for the Arcade option. In Time Attack, you pick the enemy from Meteorites, Endless Bullets, and Coke Cans. Once you have chosen, you are bombarded by meteor rocks, bullets, or cans and you have to use your skill to fight them off and push through. 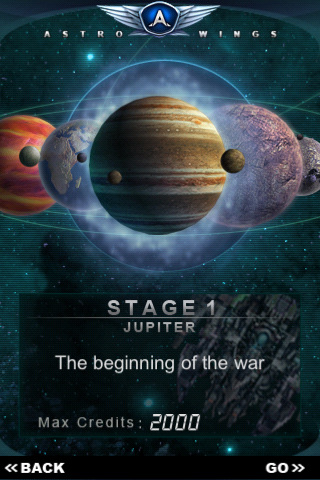 In Arcade, you are given the basic beginner level equipment and you cannot upgrade to better weapons until you have earned enough credits to do so. Before you start playing you are given a breakdown of your space plane including how many weapons and ammo you are carrying. Once you start you have to coordinate your shooting and flying effectively so that you do not end up with a Game Over. The perspective is bird’s eye and it is really easy to control the movement of the spacecraft. 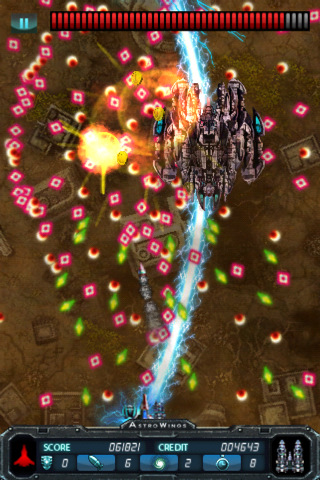 Enemy space jets come in waves and are accompanied by a mother ship, which tends to be nearly impossible to shoot down. It is up to the player to dodge bullets and aim correctly to get to the next level. There really is not much to winning but the game does require your full attention. There are 9 stages and 4 levels of difficulty so it may be awhile before you outgrow the game.

Astrowings is fun and the graphics are sharp and well made. The best part of the game is that there is not one designated area of the screen that I have to use to control the movement of the spacecraft; I can use my finger anywhere on the screen to steer. I wholly recommend it to anyone who is into air combat or Sci-Fi types of app games.