In 1999, the world got smacked with Space Channel 5 on the unfortunate game system, the Dreamcast. The game gave players the chance to play a hot-pink haired news reporter, Ulala as she copies the dance steps of her opponents and zaps them to death. In 2010, the world got smacked portably with Space Cowboy on the iPhone, iPod touch, and iPad. Brought to us by TOUCHMINE co., LTD, Space Cowboy can provide you a groovy, quirky, hilarious romp in deep space for just $1.99. 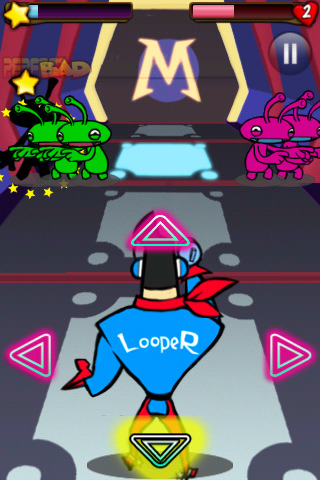 “Rhythm” the ultimate casual game genre. It doesn’t require complex combos, button mashing, RPG stats, or some new world of technical jargon to learn. It’s all about timing, following orders, and the ‘easy-to-play but difficult-to-master’ mindset. Space Cowboy gives us a brightly colored, hyper-funky alien killing. You have aliens that dance to the beat of the music with direct orders. “LEFT LEFT LEFT RIGHT!” and it’s your job as Looper, a Elvis-meets-Superman cowboy, to copy the direction and the timing in order to shoot the little alien buggers.

Musically, this is a brilliantly catchy tune that is easy to follow and really keeps the energy high, especially when the game picks up speed and the music becomes really fun. There are multiple worlds you visit and each one has a different dance beat and they are all pretty good (for dance music standards… which is nothing… but still good regardless). Graphically, the super sharp black outlines, the stylish backgrounds, and the little cute aliens really do pull together into one heck of a fun experience. Bosses are based on real life music stars like Lady Gaga, James Brown, Jimmy Hendrix, and others and the caricatures are fun and well designed… though I have to say the voice overs for the characters can be questionable. 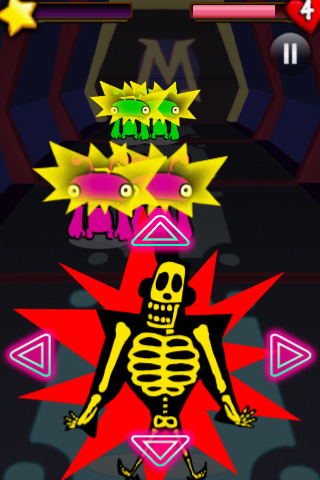 Ok, I know I’m pretty immature, but the boss fight against Lady Gaga sounded like a NSFW video on NSFW sites that you view with the door locked and windows covered… “Up Down Up Down”… then you shoot her and she moans as you hit the notes perfectly—ugh, that just made me feel dirty. Then we have the voice for the black characters. It’s bad. Like, offensively bad. Giant lips and oddly open mouths are already pretty bad, but then toss in a “GOD DAYUM” and it just feels wrong. Just a bad choice of character design and voice work. Otherwise, the game has crazy strong art direction and great music to back up the gameplay.

The game can feel repetitive however because of the way it lays out its level system. You play 3 levels before you get to a boss however the 3 levels are usually similar to each other. The challenge does increase, but honestly just 2 levels were all I needed to get used to the boss fight. It is a simple game after all. Even without a single patch as of yet, I would still recommend this one to anyone. I wish they would give you some way to keep track of the beat visually like falling arrows, approaching enemies, or some way to keep track of the tempo like Guitar Hero or DDR, but overall, Space Cowboy was surprisingly fun and really feels like a Space Channel 5. Try it out… but don’t get caught off guard if you are easily offended by black caricatures.