Eyemaze, creator of the popular Grow Flash games, has just ported their mini-adventure Dwarf Complete to the App Store, free for a limited time! It’s not Grow, and it has some technical quirks that prove mildly infuriating, but this is a deal well worth jumping on.

Dwarf Complete is essentially a puzzle game masquerading as an RPG. You’ll be forgiven if you take one look at those retro-style graphics and think you’re in for an old-school dungeon crawl, but despite the many weapons and armor for you to collect, there isn’t a single monster in sight to battle. The game was originally commissioned to promote the online MMORPG Lineage II, although the similarity between the games is limited at best. Instead of sword and sorcery, you get lots and lots of surprisingly difficult puzzles that rely on brains, reflexes, and sharp eyesight to solve. 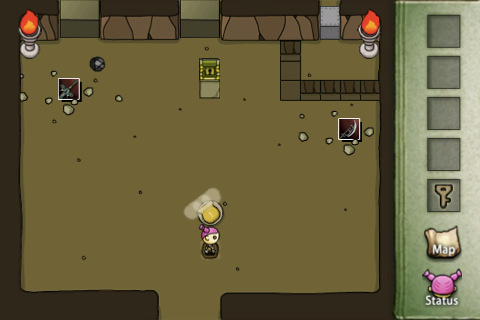 To play, using directional arrows, you guide an adventurous dwarf through the underground, collecting items to build a mystical device. There are tons of puzzles to encounter along the way, some much harder than others, but usually constructed in an approachable and understandable manner.

It’s a great little game, and I enjoyed it a lot, but let’s get the bad out of the way. The localization isn’t great. It’s not “All your base are belong to us bad”, but there are clearly some language issues at work. Thankfully, Eyemaze is a pro at non-verbal instruction, so most of the menus rely on pictures rather than words, but it does mean you won’t get a lot of detailed instruction and there is no hint system, but thanks to plenty of online walkthroughs, this is a minor gripe, and not the one that will have you tearing your hair out in frustration. 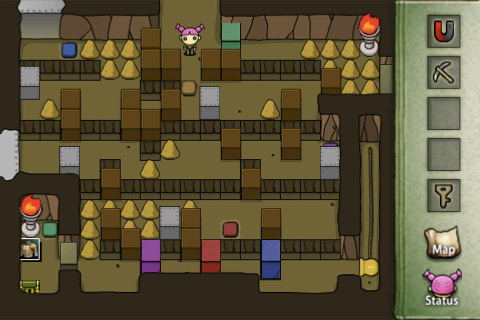 You see, the number one biggest issue Dwarf Complete has is the D-pad. It’s not fixed in place, so if you’re not extremely precise about where you’re putting your fingers, you’re going to find the arrows jumping all over the screen. Since this is a slow-paced puzzle game instead of a fighting one, you might think it’s not so bad, but I assure you, even though I liked the game, I wanted to hurl my iPhone across the room on a few occasions simply because of navigation issues.

Clearly, the D-pad tainted some of my enjoyment of the game, but the meaty puzzles, charming graphics, and pleasant soundtrack kept drawing me in. Like all Eyemaze games, Dwarf Complete isn’t always particularly deep, but it’s always extremely polished. The game won’t take you more than a few hours to work through, and there’s little to no replay value, but the short, challenging nature of the puzzles combined with the auto-save feature means you’ll be able to nibble away at this engaging treat a little at a time whenever you feel like it. And with the free launch special going on, now is definitely the time to snap this up.