With the advent of the winter season comes the anticipation of festivities, food, and…winter sports! What better time to play a nice game of ice hockey? (Is there such a thing?) If, for whatever reason, you find that you can’t step onto the ice, Bad Box Studios offers a game app called Puck ‘Em All as an alternative. You don’t even need to bring anything but your finger–or several, because playing this game is tiring.

All game modes feature the same basic set-up, a goal net with carnival-like targets sticking out all around the goal’s frame. A puck comes sliding in from the side, and you must use your finger to stop, position, and shoot it into a target. Tap the puck to stop it from sliding and fling your finger up towards the goal to shoot it. The angle in which you flick guides the shot’s direction; just like in real hockey, the faster your finger, the higher the puck will fly. There are four game modes for Puck ‘Em All: Fastest Flick, Target Practice, Goalie Challenge, and 50 Pucks. 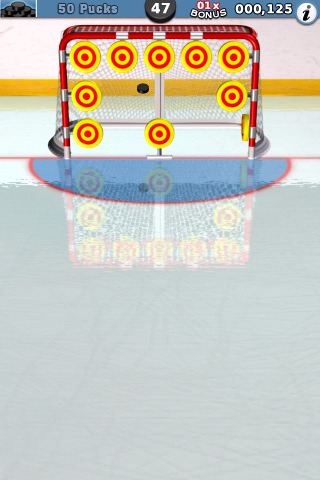 In Fastest Flick, all the targets are raised and you must knock them all down as fast as you can. Target Practice gives you only 90 seconds to shoot the targets, but instead of being stationary like in Fastest Flick, the targets of this level shift around into different patterns every so often. Goalie Challenge is exactly the same as Target Practice, but with the added difficulty of a cutout goalie guarding the goal net. It slides back and forth in front of the goal, and because different targets are raised every few seconds, it’s hard to pin down which spot would be easiest to attack. 50 Pucks is not timed, but gives you only 50 pucks with which to shoot. In this mode, the puck just appears before you without sliding in, and you cannot position it like you can in the other modes. Hitting more than one in a row adds more to your score. 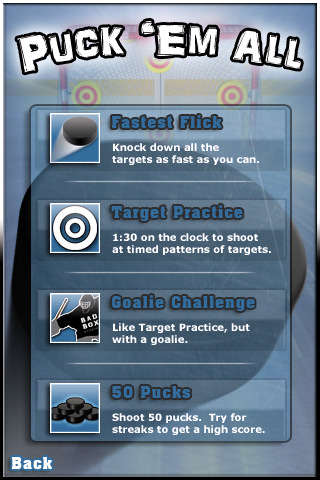 Real hockey players would probably scoff at the idea of practicing hockey without a stick, but Puck ‘Em All offers an interesting afternoon diversion. Be sure to have multiple fingers at your disposal, because repeated frantic swipes will hurt your finger. The gameplay is challenging enough to frustrating, especially since control of the puck isn’t as accurate as I like. I don’t really understand why the puck can’t just appear in front of you (like in 50 Pucks) in all game modes, but I guess if you want to preserve the feeling of a real hockey practice, it’s something you’d appreciate. The biggest problem I found was the lack of a pause button, but other than that, Puck ‘Em All is a straight-forward sports game app that won’t require much except a bit of concentration. And best of all, no body-checking-related injuries.