Hook Worlds from Rocketcat Games is a new retro style platformer iPhone game with playable levels. In Hook Worlds you are one of 4 characters who are running left to right and using a hook on a rope to jump from one platform to another while avoiding obstacles, shooting down enemies and dealing with gravity issues. Hook Worlds is like a mix of the old school Pitfall with the new iPhone game Canabalt featuring an endless running type gameplay. You get scored based on the time survived, distance travelled, and in Hook Worlds you also gain points for loot collected along the way.

The gameplay in Hook Worlds is a high speed running platform based format. In all of the four worlds, you have a hook that temporarily attaches itself to the ceilings and walls as you run, pulling you up and before dropping you off. You can repeated tap the right button to hook into available areas. The left button changes in each world, making each a different sort of game. Here are the four worlds: 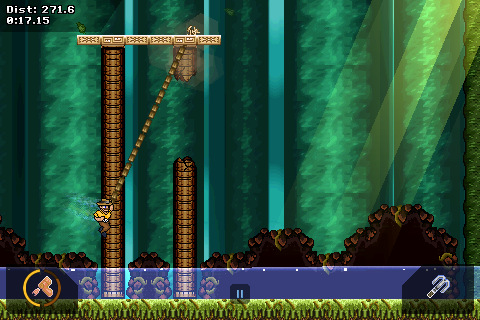 Curse of the Watcher starring Theodore “Gramps” Hooker is the simplest of the four games. Your second button performs an boost jump but it takes time to recharge. Bounty Gunner features Zelle with a shooting type runner game with a medium level difficulty. Your second button is a shooter that blasts things in your way. Cybergnome 202X is a hard obstacle survival game. Your second button is reverses the gravity and makes your hooks stick to the ground instead of the ceiling, so get ready to think upside down. Hook Champ 1000 is the most difficult of the four games. Here again you have a jump booster along with a hook, but your obstacles are insanely unfair and near impossible to get past. In each level you also have an annoying little enemy that chases you from behind and kills you if you slow down too much. 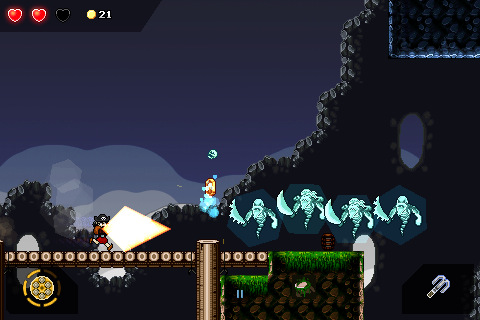 Hook Worlds lets you equip your players with Hats and Hooks using a large selection of various types of hats and hooks that you get unlocked as you reach higher scores. Games are pre-loaded using a set of dialogue screens that set the story. You can turn off dialogue stuff in the settings, which can get annoying after seeing them for a few times.

The shiny pixel based graphics in Hook Worlds are vividly descriptive and colorful. The menu soundtrack is engaging, warm and entertaining almost as if you were listening to a jazzy version of Linkin Park while gameplay music is a high energy James Bond inspired midi track.

Overall, Hook Worlds is an original speed survival game that offers a bunch of features and gameplay options and is well worth the price.