Based on The Gingerbread Man fairy tale, Devsisters’ OvenBreak Infinity is a fast-paced, highly addictive yet incredibly frustrating game that is not for the casual app gamer. Don’t be fooled by the cute graphics – this iPhone game requires more skill than you’d expect from something that features a gingerbread man as the hero.

Help Ginger Brave as he makes his escape from the witch’s oven in order to avoid joining his gingerbread brothers in their fate as a delicious mid-day snack. Ginger Brave automatically runs across the screen, starting in the oven where he wakes up to realize that he’s going to be toast if he doesn’t get out of there fast. Eventually Ginger Brave will make it out of the oven, through the house and then into the woods towards freedom – but only if you can make sure he doesn’t get destroyed while on the run. 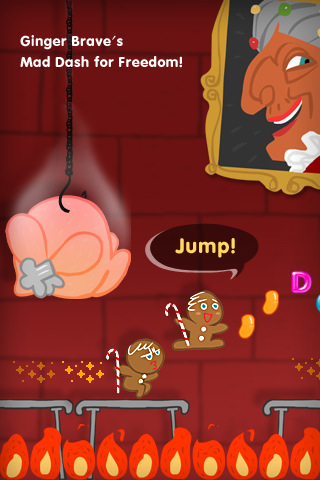 You control Ginger Brave’s movements, tapping on “jump” and “slide” on the bottom left and right corners of the screen respectively as the little gingerbread runs across the screen towards freedom. Use Ginger Brave’s candy cane to latch onto hanging hooks to swing across large gaps between platforms. Collect jelly beans to score points while avoiding obstacles in the form of glassware, witches’ hats, clowns and other creatures determined to stop Ginger Brave’s escape. There are also alphabet jellies which you can collect to spell the word FREEDOM to gain a bonus life. This will definitely come in handy as you progress through the level due to the difficulty of the game.

With just four levels – easy, hard, crazy, and happy – one would think OvenBreak is a short and sweet game. This is a lie. First you have to actually be able to complete the level. Ginger Brave moves very quickly across the screen – sometimes so quickly you don’t see an obstacle in front of you until you’re already dead. Your best shot at getting through the level is to die, die, die while memorizing the map in order to anticipate these obstacles for next time. Another problem with OvenBreak is the “hook” option. When you jump and encounter something you can hook on to, the “slide” button changes into “hook”. But actually being able to tap on “hook” in time to swing takes practice. And while you’re practicing you’re also dying. Learning the map and anticipating when you need to hook onto something is also a good idea. 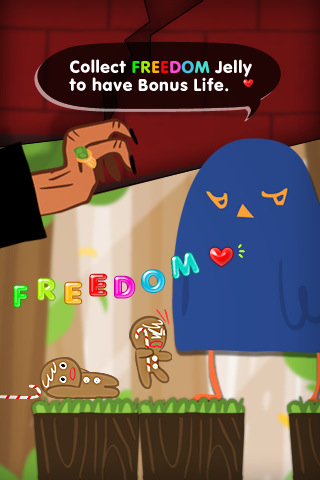 Despite these very big problems, OvenBreak is a lot of fun when it’s not incredibly frustrating. The graphics are rich and the music is fun and cute, making the gaming experience a delight. If Devsisters slowed down Ginger Brave’s run and gave the player more time to react, the game would be more friendly towards the casual player. For those reluctant to spend money on a game they might not be able to beat, there is a lite version as well.