Zombie games have basically dominated the App Store for ages now, so I was actually pleasantly surprised to discover the quirkily titled Zombie&Lawn was NOT an outright clone of Plants Vs Zombie, Zombieville USA, Zombie Farm, etc. Which isn’t to say that Zombie&Lawn is particularly original, but I appreciated that it wasn’t a straight-up copy.

An arena-style beat ’em up that pits you and your trusty lawnmower against a shambling undead horde of, you guessed it, zombies, Zombie&Lawn doesn’t exactly push the limits of the genre, but it tries to blend aspects of more successful games into one big cartoony gorefest of epic proportions. 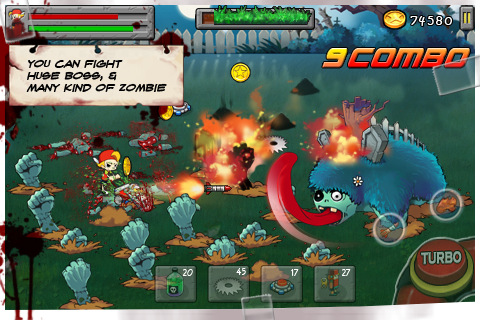 Instead of progressive side-scrolling action, you have a large-ish expanse of lawn that you must defend by using either the joystick, tilt, or drag controls to mow down waves of zombies or vicious weeds that will eventually turn into zombies. Between waves, you have the option of visiting the store where you can purchase new items or upgrades with coins you’ve harvested from the freshly mown dead. All in all, the overall feel of the game is very much Plants Vs Zombies meets Zombieville with just a smidgen of Whac-A-Mole.

Unfortunately, mashing all of these games together results in what is best characterized as a hot mess. You end up with way too much going on, not enough explanation about what everything does, while gameplay swiftly becomes dull and repetitive and the limited animations grow stale. The controls are all right, and the Survival Mode and Game Center achievements help to eke a bit more life out of the game, but that doesn’t change its flawed nature. 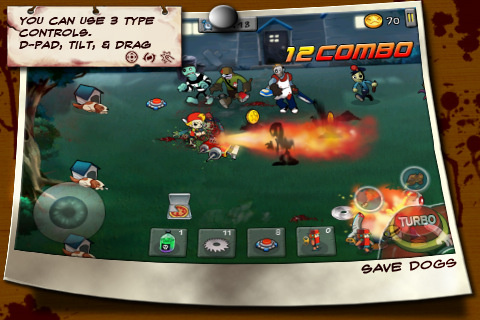 I suspect that developer Enterfly may be limited in the English department, because adequate descriptions of zombies or items in the store are practically nonexistent, and the text you do encounter feels like a linguistic puzzle. It’s not hard to figure out the basic mechanics of the game on your own, but when more complicated enemies start showing up, it would be a lot nicer to be able to base a strategy on something other than blind trial and error.

Of course, the biggest issue Zombie&Lawn presents is that the levels just don’t provide enough variety. Although there are 30 different levels to tackle, the action starts to get blah just a few levels in. Admittedly, later levels can be seriously challenging, but they never really manage to be fun.

I did kind of like the cute, but gory graphics, but they didn’t jump out as particularly eye-catching or innovative, which is basically how I felt about the game as a whole: it was okay, but mostly derivative and nothing really special.