Based on the Fabled Lands HD series of gamebooks from the mid 90s, Fabled Lands HD brings Choose Your Own Adventure style gamebook play to the iPad.
I should probably flag straight away that I didn’t read those books in the mid 90s and, as my time with Fabled Lands HD failed to pique my interest, I won’t be reading them in the foreseeable future either.

Knowing my antipathy to the gamebook genre in as a whole do you:
1) Ignore this review and proceed directly to http://itunes.apple.com/us/app/fabled-lands-hd/id415170080?mt=8 to purchase a copy of Fabled Lands HD
2) Cast a level 6 cynicism defense and seek and audience with the provost marshal
3) Acknowledge my witty parody of the game book genre and read the rest of the review, regardless. 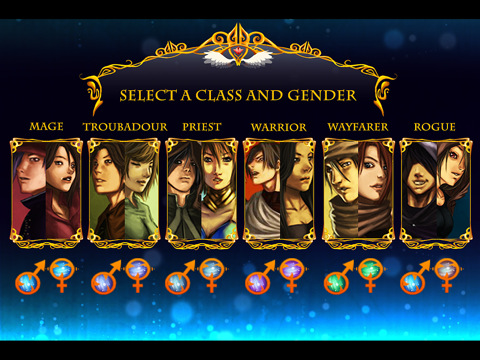 Billed as THE ULTIMATE 2D ADVENTURE, Fabled Lands HD is an odd beast – an RPG in the traditional sense, but on the new hotness that is the iPad. Sat in the RPG folder on my iPad and next to my Final Fantasy, Broken Sword HD and Monkey Island apps, as a non-devotee of the series, Fabled Lands seems a little out of place in the modern gaming landscape. It’s like playing a cutting edge RPG … for the Atari 1040ST.

However, if you love the series, then this release has probably got you hot under the collar. The first app, based on The War-Torn Kingdom, included new colour art from Russ Nicholson and captures the feel of a gamebook incredibly well. Very little is added too the digital version of the game, mostly static images and a simple MIDI soundtrack, all of which add a lot to the retro/authentic feel of the game. 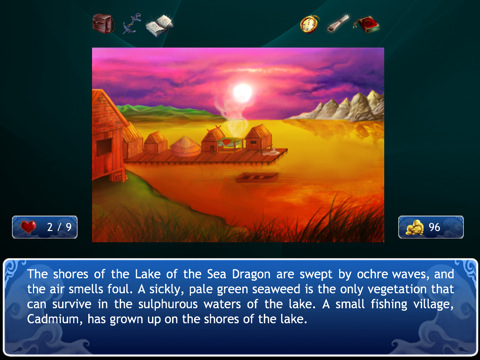 At the start of the game you are presented with a range of characters – Mage, Troubadour, Priest, Warrior, Wayfarer or Rogue – each with a different backstory and set of stats for things like Charisma, Combat and Magic. In THE WAR-TORN KINGDOM, which this game is based on revolution rages in Sokara. Whichever character you choose, you can join forces with the king to restore his throne – or look for profit in the pay of the dictator, Grieve Marlock
Gameplay is incredibly text heavy, with lots of (some might say too much) exposition. A series of static images is on every “page” with text below either describing the scenario or presenting a series of choices – much like a Choose Your Own Adventure book. The actual gameplay follows the books very closely, so if you love the gamebook style of play and especially if you are fan of the Fabled Lands series of books you’ll probably love this. If you have no fond memories of this style of gameplay, then this is probably not for you, especially for $8.99.