Released by Ryan Chrisholm and Bennett Foddy, Evacuation is available on the iPhone, iPod Touch, and iPad for $0.99. Aliens have invaded the ship and a group of spacemen and you are in control of the air locks. Can you manipulate the airlocks without killing everyone on the ship? Does anyone else see the “2001 A Space Odyssey” resemblance? Let’s just pretend you play HAL and you are actually trying to save everyone on this ship! I guess the mission is still too important for all the crew to die right now, maybe later (buahahahahaha).

Tap on a colored airlock door to open all doors of the same color. If the rooms are in anyway open to space, the pull will suck aliens or your crew members out. If your captain gets sucked out or if all of your crew members are ejected or eaten by aliens, you lose. So be really careful what colors you tap, what order you tap them, and make sure to time your taps just right. Evacuation’s challenge comes from the really well done puzzles and many levels have multiple solutions. It’s really enjoyable. 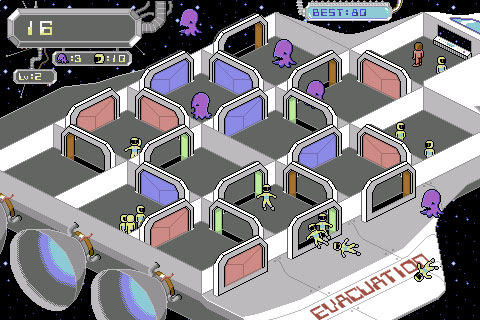 The graphics are a pixelated nostalgia bomb. The title card is hilariously cheesy with that grainy early PC game feel. The in-game aliens and crew members are actually pretty cute. They are well animated and are supported by great sound design. Hearing the little crewmembers scream ‘ahh!” as they get sucked out of the ship is morbidly enjoyable. The isometric view is unique and well done and for some reason, I just get a kick from the ship being called “Evacuation” as if they knew something was going to happen. Sort of cursing yourselves aren’t ya? 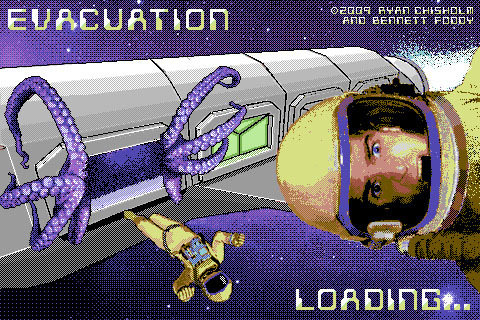 So the controls are simple. Tap on a door to open them, tap on the floors to set a flag. This flag will make all crewmembers to walk to it if possible. You can guide them into different rooms with this system so they will be safe from the gravitational pulls. Sometimes, I use these flags to position them away from the door I’m about to unlock, wait for the aliens to move closer to the doors, then quickly tap the door twice to release the alien and only pull the crewmember a little bit. That’s one of the many time-based tricks you can pull off in Evacuation.

I had a great time with Evacuation because of its simplicity. You just have to keep your crew alive. It’s one mechanic that is both easy to learn but really hard to master as the game progresses in difficulty. You have an extra mode where you try to increase how many crewmembers you can save and how efficiently you can deal with aliens in randomly generated levels. If you beat a level without losing a single crew member, you gain one or two new members for the next random stage.

Overall, Evacuation is definitely a worthwhile game app. 27 very well done levels with hopefully a lot more coming, I highly recommend it. This is a really refreshing app to play after two really long RPGs so for those of you who don’t want long story lines with fetch quests, play Evacuation for its cute alien killing puzzles. Readers, this conversation can serve no purpose anymore. Goodbye.