On a dark and dreary night, you find yourself in the middle of a cemetery where an endless supply of zombies rush towards you. You’ve brought four weapons and try to survive the never-ending onslaught. Sorry for the clichéd intro but I thought it fits this game very well. Zombie Sweeper by Project Soul is an app for the iPhone, iPod Touch, and the iPad. This game reminds of Bruce Campbell and the Evil Dead series of movies he stars in. You are in the middle of nowhere and trying to kill every zombie in your sight. The zombies try to confuse you and get a sneak attack. Zombie Sweeper uses the overused zombie concept but their attention to detail might get you to give this app a shot. 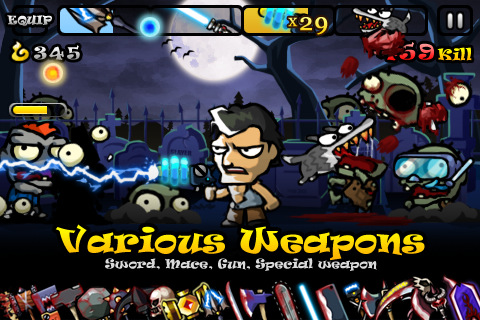 The gameplay is very simple, all you have to do is to tap the left or the right side of the character and he will attack in that direction. You also tap one of the three weapons at the top of the screen when it is charged to switch to that weapon. Finally by tapping the special icon at the bottom of the character, you will use your fourth weapon. Sooner or later you will have to tap quickly to deal with the larger number of zombies onscreen or to do successive attacks to a stronger zombie. If you miss, you will be left at a disadvantage and a zombie might eat you. When you kill a boss zombie, you will get a protective piece of equipment which will take a hit for you. Your character can only have two max. You start out with four weapons which are blunt, sharp, long ranged, and special respectively. You can buy weapons of each type but can only bring one of those types with you. When you defeat zombies, they will most likely drop blue souls which charge up the weapons you‘ve brought with you. When the meter for a weapon is full, it will have a yellow border which means you can use it or you can defeat more zombies to fill up the next weapon. When you select a weapon, the charging starts with the blunt weapon. You can only select the first three weapons to use in this way while the special weapon charges on its own and you can use it by tapping on the special icon at the bottom of your character. You can get more blue souls by killing multiple zombies in one blow. Yellow souls drop randomly from common zombies but appear more often when you attack a boss zombie. With the recent update, collecting one hundred yellow souls will give you a single gem which are used to buy weapons and upgrading said weapons.

Gems can also be gained by killing zombies but it occurs at a low percentage. There are three types of zombies in this game which are male, female, and a male boss. They can be slow or fast but the boss zombies try to trick you especially when they turn red. When this happens the boss zombie might rush towards you, make you think it will be on one side but will be on the other side, leap at you while there is a group of zombies coming towards you, and other tricks. You might die to one of these tactics but everything goes towards the achievements which are actually rewarding. When you get an achievement you will be rewarded one gem or more depending on the achievement. There is a leadersboard to compare things like total amount of zombies killed, how much time spent playing this game, and more. 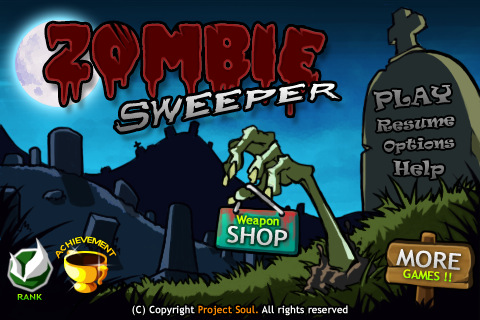 Zombie Sweeper’s graphics are standard stuff which are a mix of flash games and cartoons but are polished and detailed. You may see a zombie in a superman outfit flying through the night or something riding a bicycle near the moon which may distract beginning players. When you activate the cloud special weapon which shoots lighting at random areas at random times, you will feel like you’re in an actual storm. During this attack, there are flashes and rain while it also sounds like a storm but for a short while. If you are using the electronic saw weapon you can cleave a zombie in half and see half of its brain and spinal cord with some miscellaneous flesh chunks. There is blood and other forms of violence and gore. The only complaints I have for the visuals are grammar problems in the text window describing weapons and the reused zombies (they can wear protective equipment but nothing special). Overall, the graphics for Zombie Sweeper are standard but are impressively detailed.

The audio is just as detailed as the graphics. The only bad part is the song which is repetitive but fits the atmosphere of the game. I hope Project Soul will allow you to play whatever music you want since the game is fun but the song can get boring after so many times. The sound effects are detailed such as the storm cloud weapon and the electric saw ripping away. Zombies moan, female zombies scream, and boss zombies just take a hit. When a weapon is ready to be selected there is a sound effect. Killing multiple zombies in one attack will have someone saying double, multi, and crazy kill. Zombie Sweeper does not have a variety of songs but their sound effects are specific and helps in the setting of this app.

Zombie Sweeper is priced at $0.99 on iTunes. This is a pick up and play type of game since there is only one level and all you do is kill as many zombies as you can. You can select to return to the title screen on the pause menu when you want to stop and select resume when you want to. If you die, you start from zero kills but get to select your difficulty setting. I suggest on trying to get three hundred kills since this will unlock hardcore difficulty (I think, sorry if I’m wrong). You can play on normal or hard difficulty to collect souls and gems to buy weapons and upgrades. You can also do this to get the achievements. Overall, Zombie Sweeper is a simple yet fun and detailed game which is nice to have especially for the zombie oriented games.