My first reaction to You Don’t Know Jack for the iPhone and iPod Touch was “Oh, wow, I can’t believe this is still around!” Admittedly, that was a little unfair of me given the trivia game’s immense popularity, but I still remember when the game first came out in mid-90’s, and seeing it as an app came as a total blast from the past, complete with the familiar California surfer-esque host and somewhat cheesy branding. Dated as the game seemed, however, playing it was a completely different story.

The entire game has been revamped and updated, so not only is it sporting a fresh and easy to use touch interface, but it also has a slew of totally new content, and I really do mean new. I’d been expecting a retro repackaging of the original 90’s content, but instead I got super-recent jokes about Rebecca Black and Charlie Sheen. It was a little jarring, but also refreshing, which is a basically true description of the entire game. 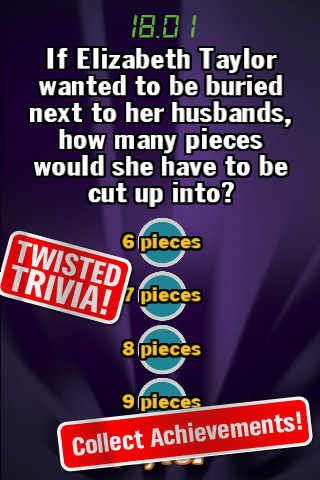 If you’re more used to getting your daily dose of trivia from Jeopardy, you might find the in your face style of YDKJ a little off-putting. Cookie Masterson, the fictional host, definitely brings some snark if you get a question wrong, and the general style of jokes can range between schoolyard crude to brow-raisingly risque.

Like most trivia games, you can expect a wide range of subject matter to be covered and speed is generally of the essence. YDKJ is broken down into a number of rounds, and each round might also comes with a specially formatted quick-fire challenge in addition to straight-up trivia questions. For example, in “Dis or Dat”, you might be presented with a number of titles and you have to identify whether they’re a Hemingway novel or a Jimmy Buffet song. All questions are presented in a simple multiple choice format, so there’s no need to worry about speed-typing.

Now, if you’re just looking for trivia, YDKJ is adequate, but the majority of the fun comes from the off the wall commentary and verbal abuse from the host, so if you’re not down with that, it won’t be worth your time. If you’re a fan, though, you’ll love this highly polished version and get a kick out of the tons and tons of voice content. 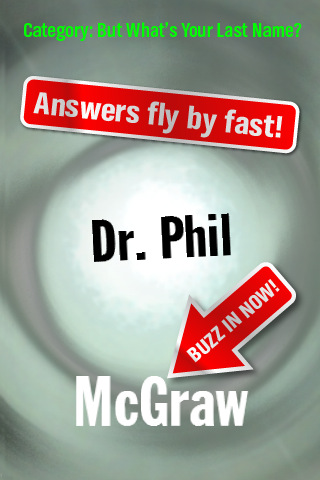 In general, the only thing I found a little frustrating was that you couldn’t skip the animated transition screens between questions. They’re lovely the first time around, but it gets old very quickly, although there are only 20 episodes/games to play through, so perhaps its best you can’t blitz through them all at once. I was also a little surprised that there was no way to quit a game once you’ve started, only pause it.

Overall, I was really surprised and pleased by YDKJ, and the app was a really polished and gorgeous representation of the franchise. I was slightly disappointed at the game’s single player status, but there are plenty of Game Center achievements and leader boards to keep you occupied if competition is your thing.

Bottom line: If you like your trivia with a healthy side of snark and a touch of risque, age hasn’t mellowed You Don’t Know Jack one bit, and it emerges onto the app scene as a very smart and sharp challenge for grown-ups.

Sample the free version of YOU DON’T KNOW JACK on your iPhone.