Gaming powerhouse Square Enix’s latest offering, Imaginary Range, is completely free app and a bit of a puzzle to classify. It’s an experimental project for the iPhone and iPad that is part comic book and part game. The overall effect is that of a hyperactive Japanese daydream, with giant robots, a completely nonsensical plot, ludicrously over-sized weapons, and beautiful anime women in improbably skimpy outfits. In other words, a typical Neo-Tokyo Tuesday.

Although Imaginary Range is not exactly explicitly linked with the Final Fantasy series, it was developed by H.A.N.D., the same company responsible for Final Fantasy: Chocobo Tactics on the Nintendo DS, and FF fans will be quick to note the super strong series ties; one of the main characters is named Cid, there are demonic Moogle images for people to hunt down, and Chocobos even make a brief appearance at one point. 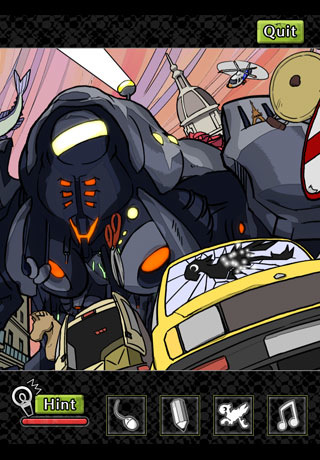 Stripped down to its most basic form, Imaginary Range is essentially an interactive graphic novel. There’s a visual story that unfolds in a classic comic format, depicted in a fast and loose, sketchy manga style with limited dialogue. Some of the pages also have some basic animation. As you work through the story, there are various icons or items hidden throughout the panels for you to collect. Some of these items are used later to help fuel the story’s action, while others are used to unlock additional meta-content, like gallery images.

You also come across panels that launch you into a mini-game you must complete before moving on with the story. Most of these mini-games are very basic, like sliding tile puzzles or very simple line-drawing action games, but they’re all directly related to the story in some way. Although the games aren’t especially innovative or difficult, they are generally polished and attractive, and they help make an otherwise confusing storyline more engaging. 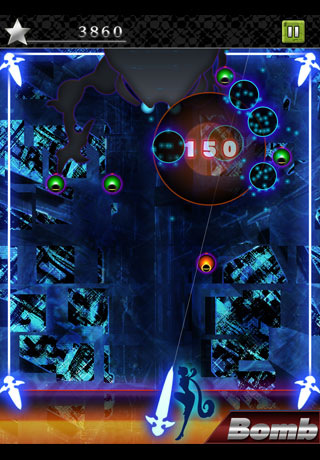 Overall, I was really quite impressed by the amount of free content Imaginary Range brings to the table. There are 53 fully illustrated comic book pages to work through as well as several mini-games. Once you’ve worked your way through the entire comic, the mini-games become accessible from the start menu if you feel like tackling them again, and you can use coins you earn from finding hidden icons to purchase scratchcards to try to win development sketches.

From the “To be continued…” ending, I assume that Square Enix has intentions of releasing more installments in the future, which I would be excited for. Although I wasn’t completely enthralled by the story, the app itself is very beautifully produced and a stellar example of how to make the most of interactive storytelling on the iPhone and iPad, and it’s definitely worth checking out if you’re a gaming or comics fan.